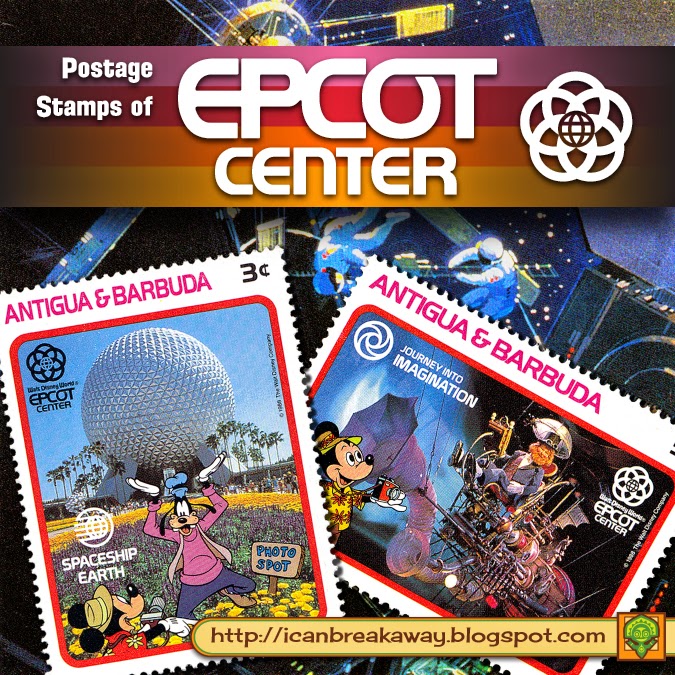 Welcome back and Happy 2015! Sincere apologies for a noticeable lapse of activity here since October—but with an unexpectedly busy Holiday season tucked away, things are finally gearing back up for new content around these parts. Thanks to all the returning readers for your outstanding feedback last year, and thanks to all new visitors who've found their way here, many through a recent sponsorship via The Season Pass Podcast (more on that show at the end of this post.) 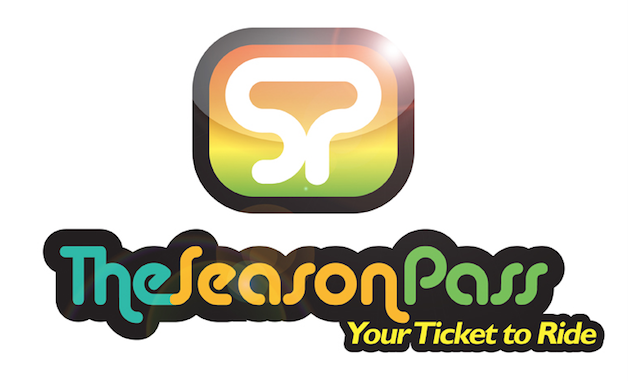 Since we're looking to the future, this first post of 2015 takes a glimpse back at a theme park that looked ahead. Cleaning up an old bedroom set, I discovered a small wax envelope underneath a bookcase for many years containing about 125 Walt Disney themed postage stamps from around the world in the early-to-mid 1980s. 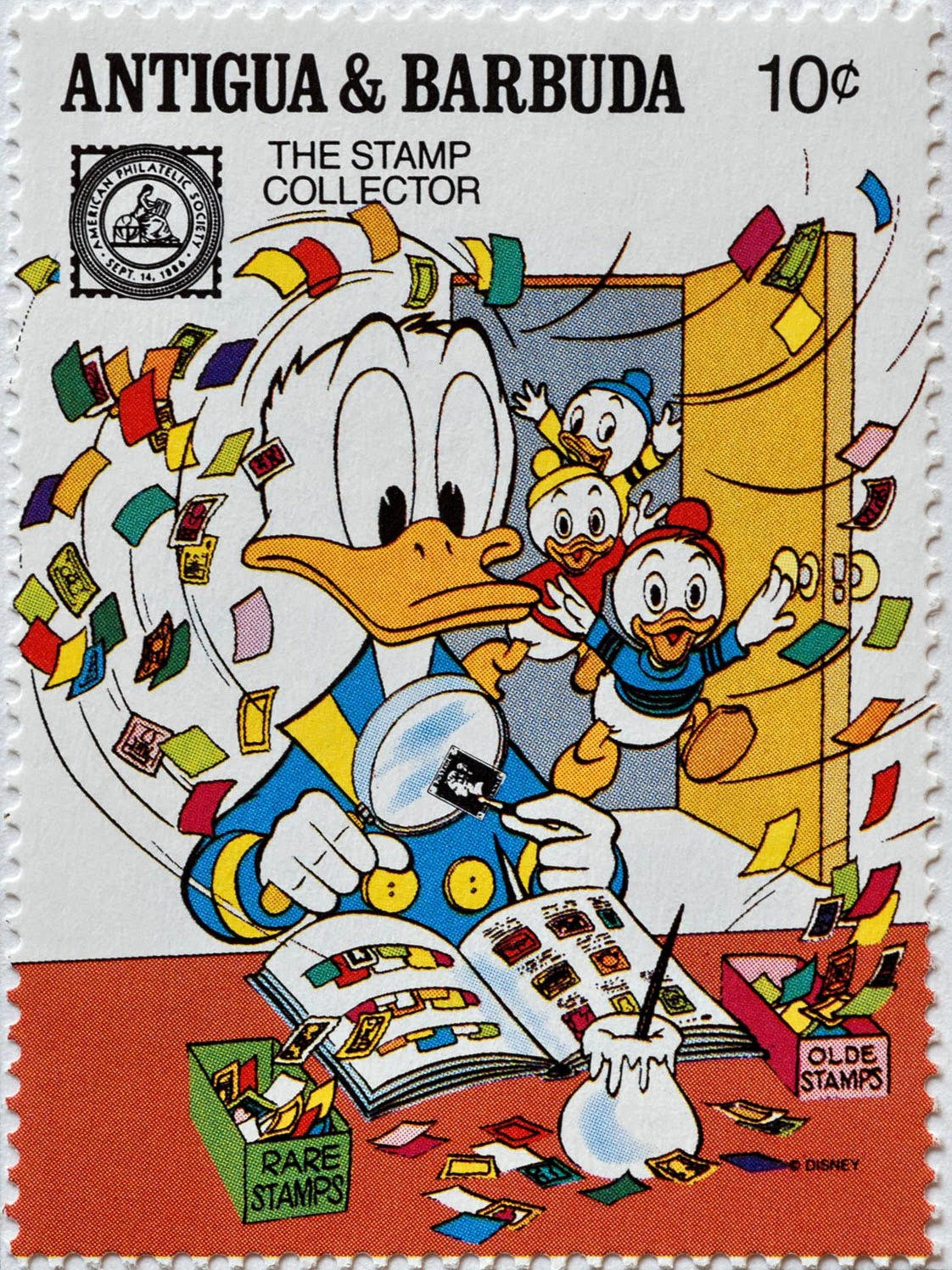 Many of the stamps featured unique illustrations, each focused on a general or specific theme. Two stand-out themes found within were selections of an "American Legends" series with the animated depiction of Johnny Appleseed from Melody Time (1948) and John Henry (twelve years prior to the release of Walt Disney Feature Animation's animated short John Henry). 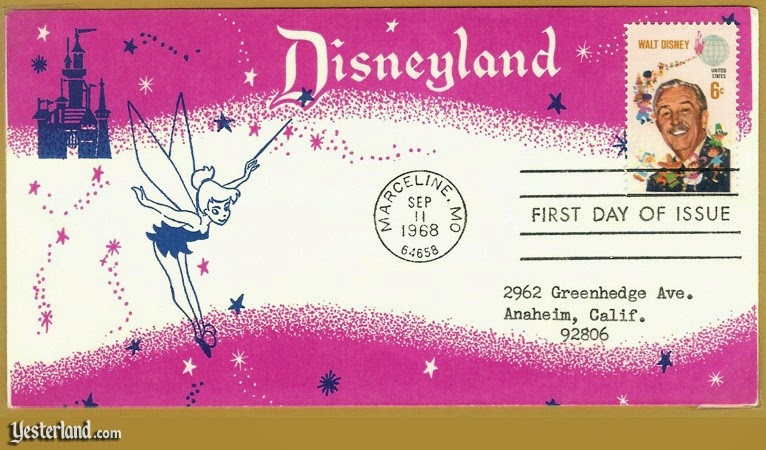 Despite the focus on American Legends, all of the stamps within the envelope were issued outside of the United States. Following Walt Disney's death in 1966, a commemorative stamp was issued featuring his portrait, less than two years later, bucking the Post Office policy of a 10-year wait between an individual's passing and their image appearing on a stamp. While postage stamps featuring animated characters are commonplace in the 21st Century, they were non-existent in the United States prior to the mid-1990s. In fact, Mickey Mouse was pretty late to the game: he didn't actually show up on a U.S. postage stamp until 2004!

A Spectacular View From Shirley Heights, a Popular Perch on the Island of Antigua
Image © & Courtesy of Gosita.com

The second stand-out was a series of stamps focused on the original attractions found in the Future World section of Walt Disney World's EPCOT Center—the images immediately stood out in that they were the only stamps in the envelope to feature a theme park setting and the only designs to utilized character art with actual photographs. The EPCOT Center stamps were issued in the Eastern Caribbean dual-island state of Antigua and Barbuda in 1988.

Here are nice-quality scans of the six EPCOT Center stamps found within (click on each to enlarge)—the designers used the space nicely, fitting in not only the original EPCOT Center logo, but the icons and titles for each individual pavilion! 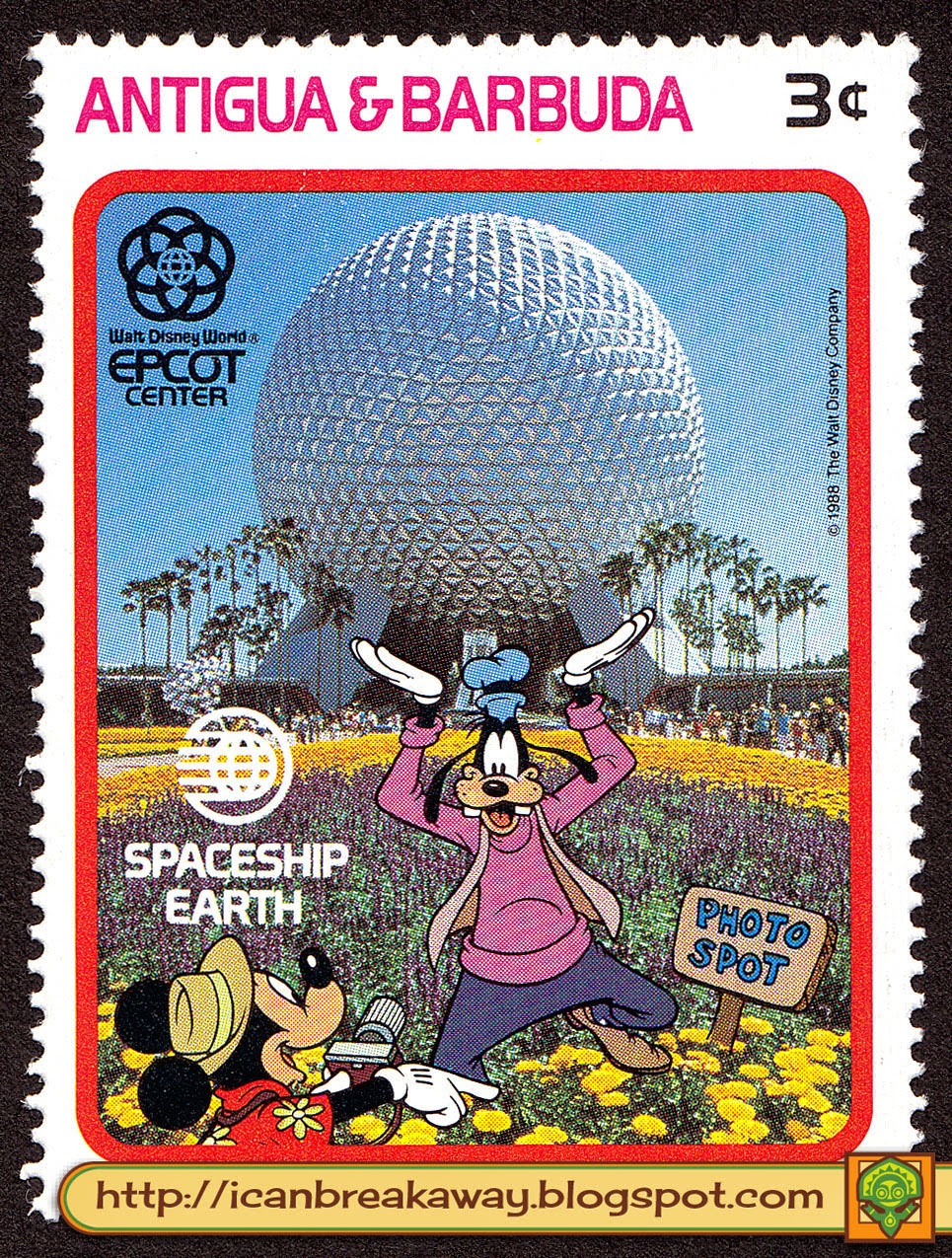 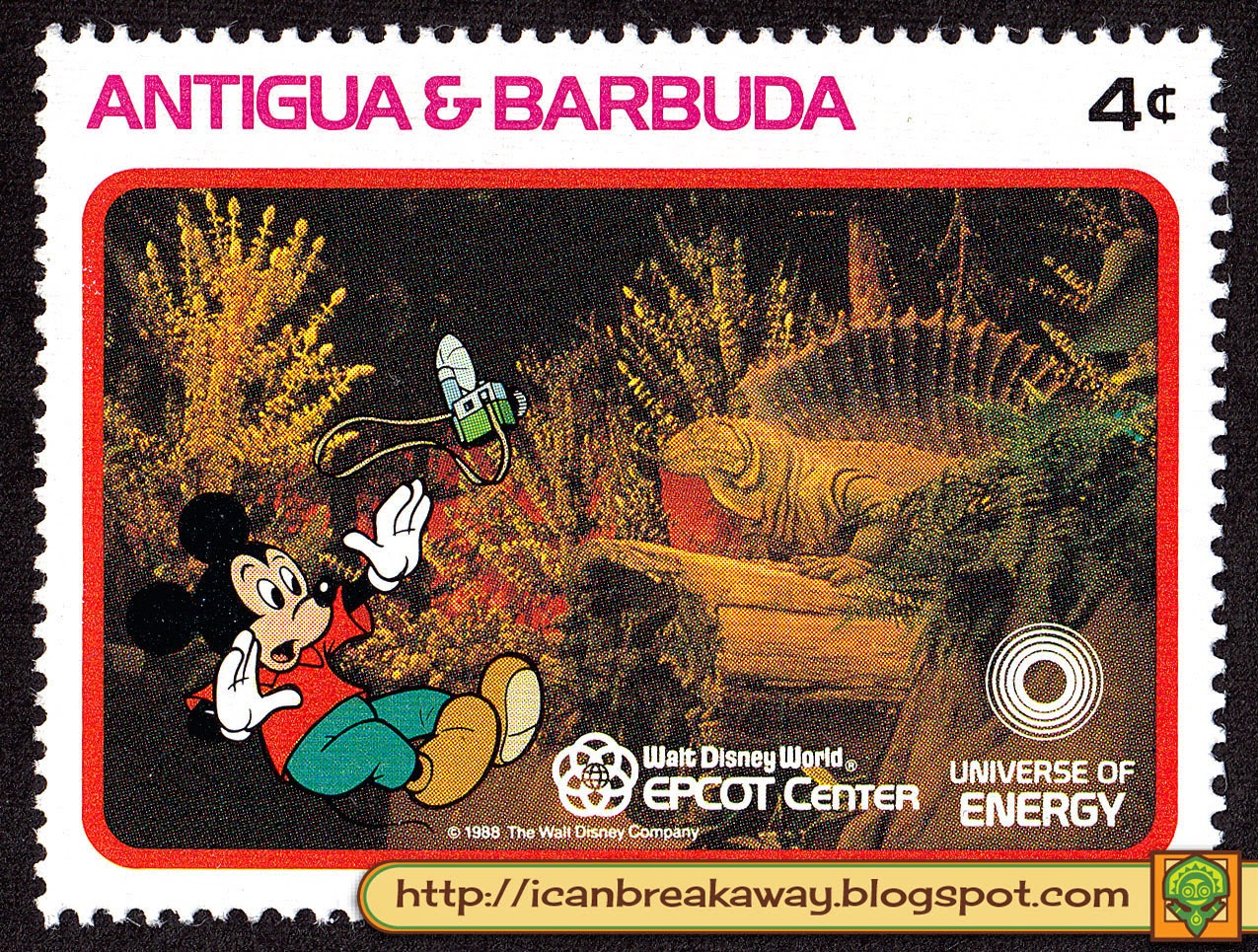 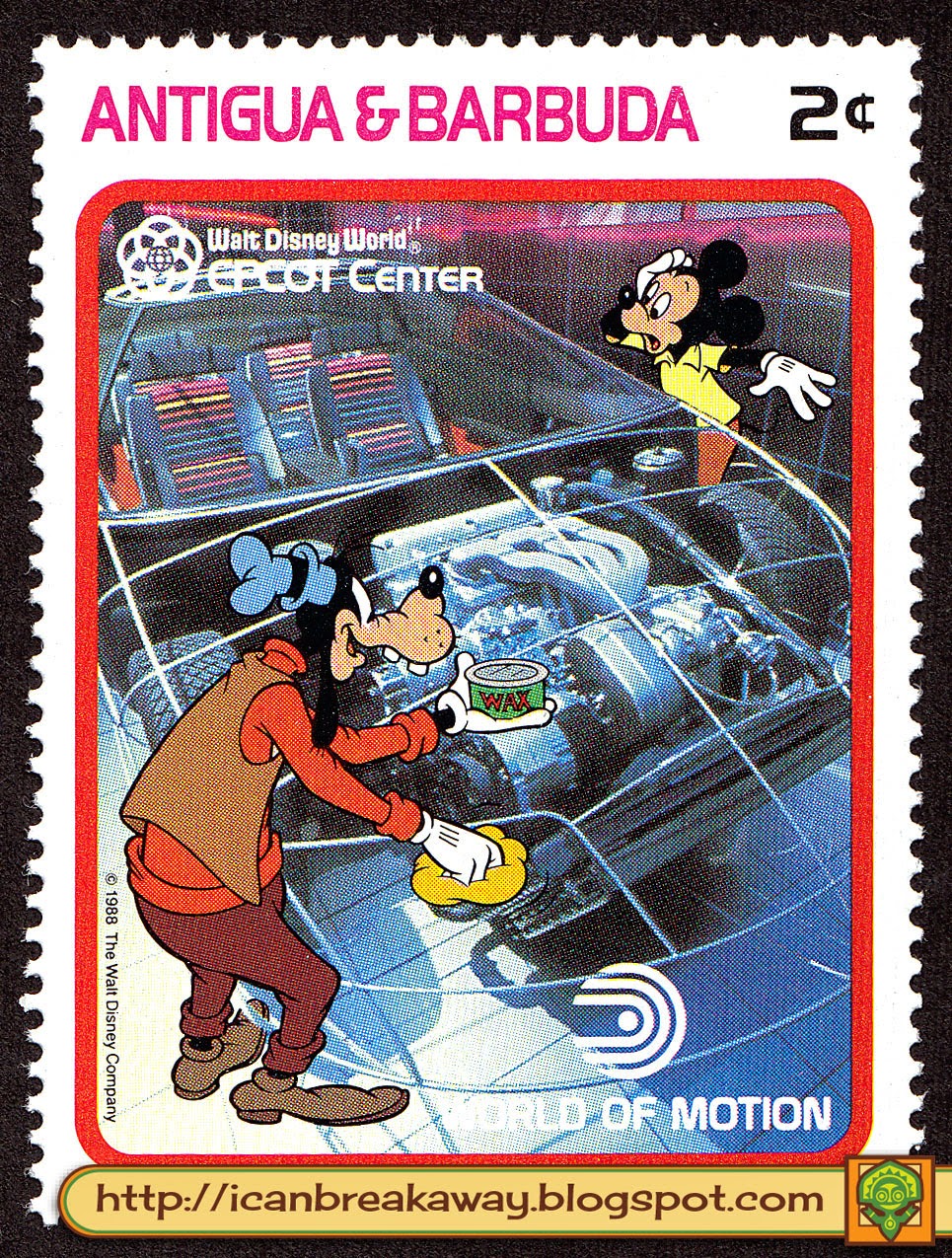 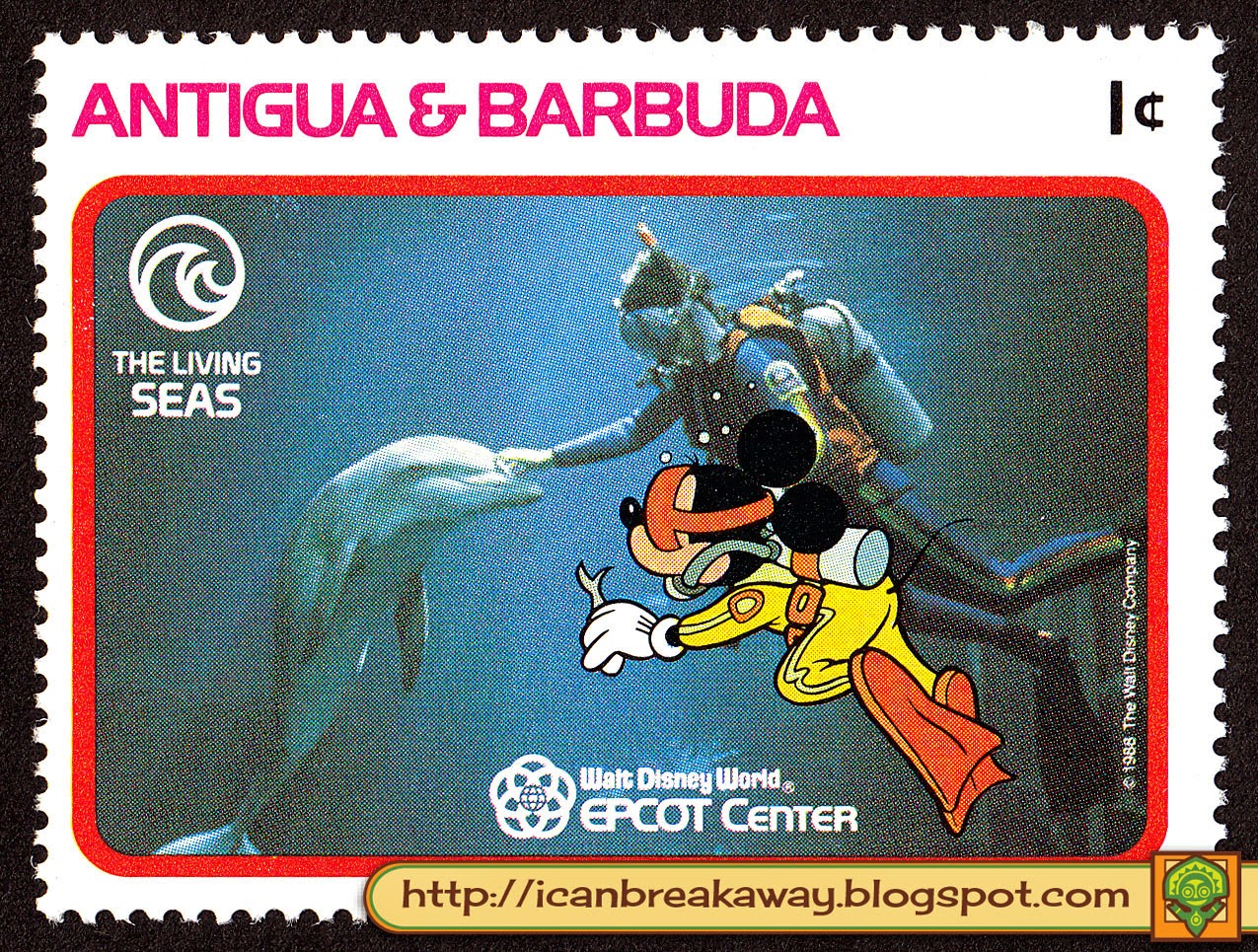 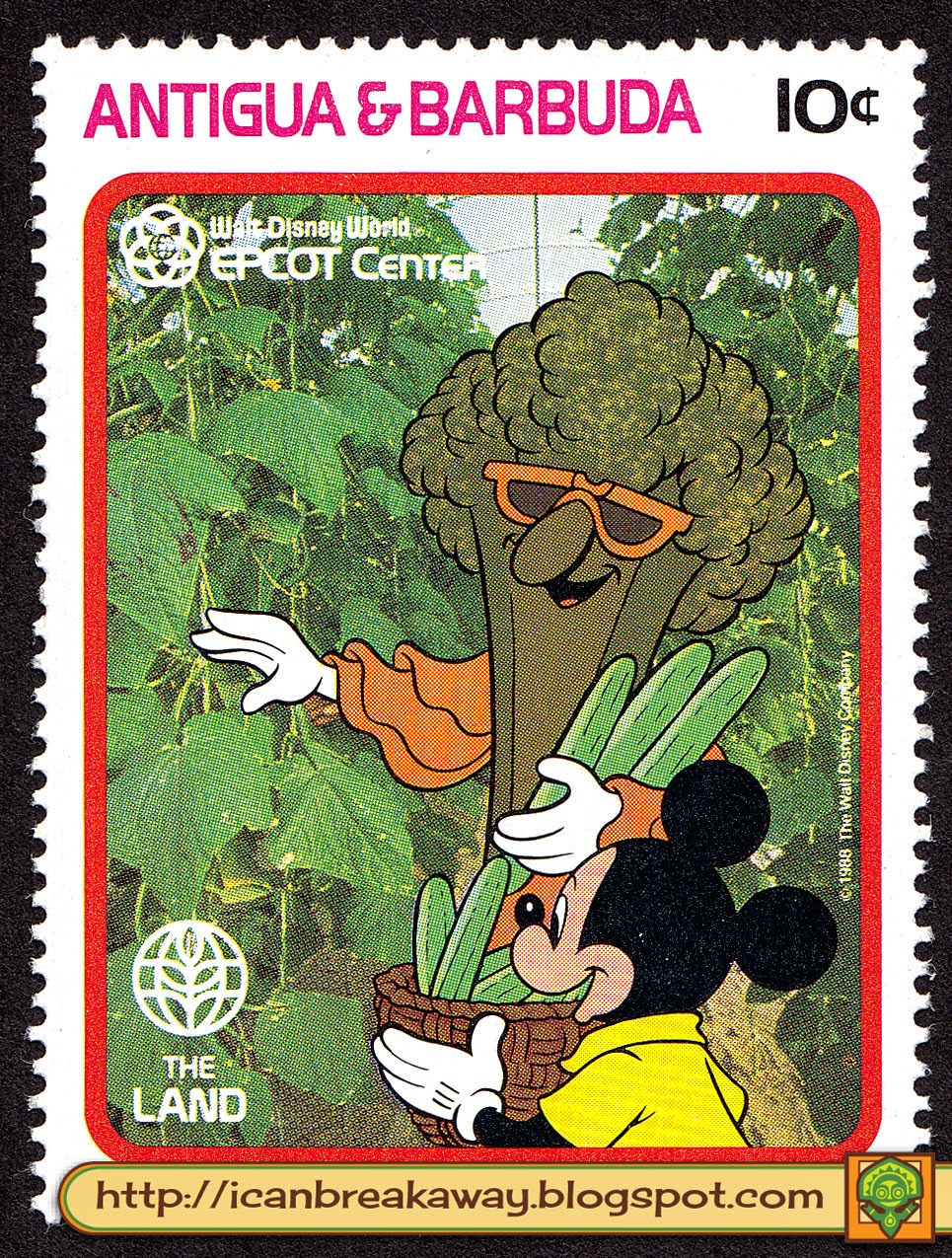 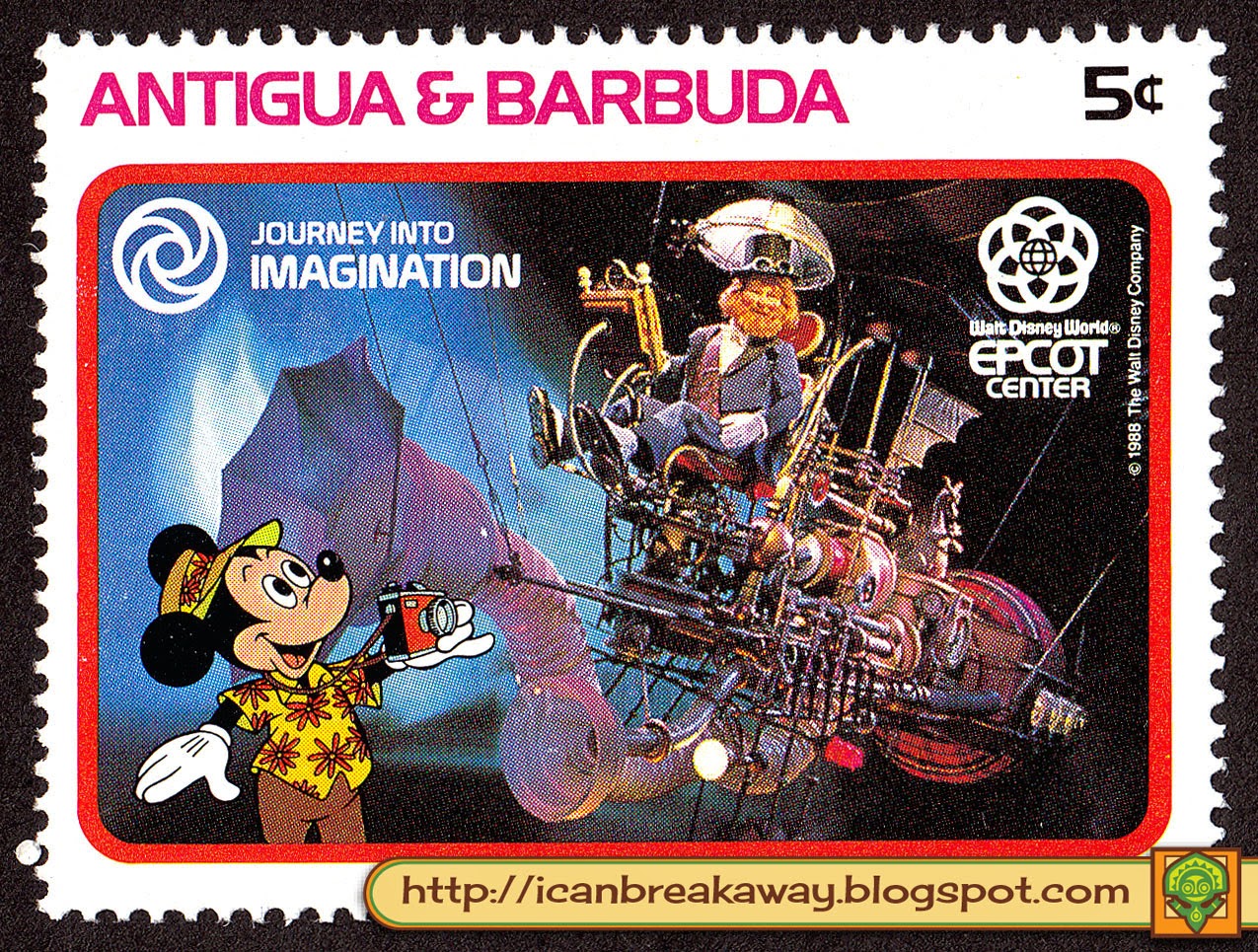 Upon posting a quick photo of one of the stamps, Twitter user @MrProjectionist pointed out a link to Ken Polsson's comprehensive site, providing a small JPEG mosaic of the entire series (see image below). Interestingly, several images were repeated for higher postage rates... and the $5.00 stamp actually depicts a traveling Mickey Mouse heading towards the Contemporary Resort* six miles north of EPCOT Center! 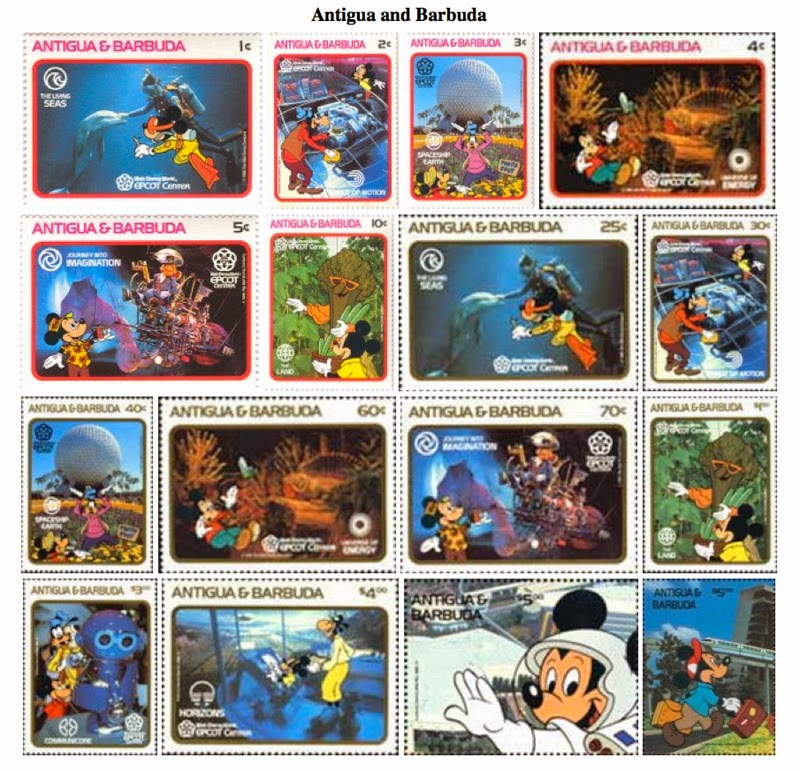 Should I come across the remaining four stamps in the series offered for sale, I'll scan and add them in as an addendum. In the meantime, I'd like to welcome new visitors who arrived via The Season Pass Podcast. I Can Break Away is a co-sponsor of their most recent episode #292, the subject of which is sure to please fans of theme parks and EPCOT Center in particular: Part IV an exclusive interview with Walt Disney Imagineering's Tony Baxter.

You can listen to the new episode directly on the TSPP website HERE or subscribe via iTunes. The hosts are cordial and honest while covering a wide range of topics from all levels: creative, executive, and in-park employees. The full four-part interview with Tony Baxter can downloaded in the following episode links: 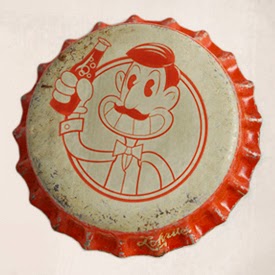 As I mentioned, episode #292 was co-sponsored by myself and another sponsor which deserves a look: the O-Zell Soda Company, which produces delicious natural sodas with a twist of real Walt Disney history! Please visit the link to their site and support The Walt Disney Birthplace Project in Chicago, IL: O-Zell Soda Company 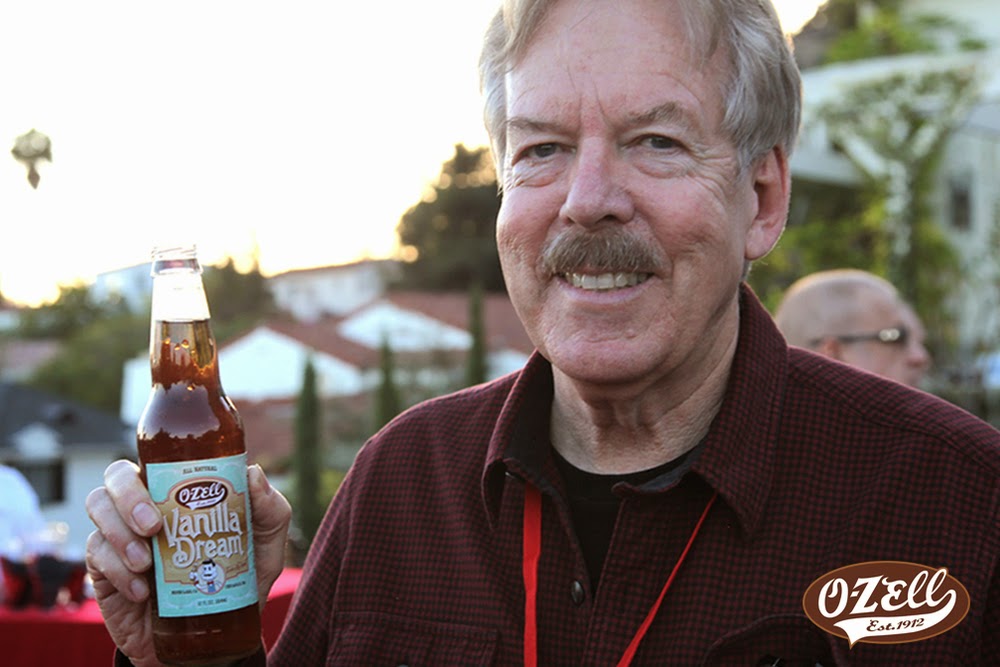 Yesterland: Edward Bergen on the Walt Disney Stamp of 1968

* For our Walt Disney comic book sleuths: I believe that Contemporary Resort Mickey looks very much like he was drawn by Italian comic book legend Romano Scarpa. Thoughts?
Posted by Dan at 7:27 PM