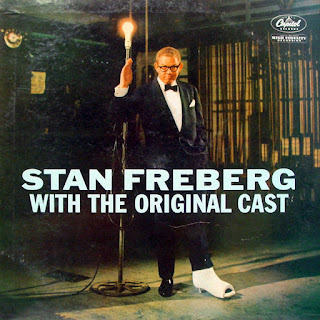 Stan Freberg turned 86 this week and he's still working! An advertising iconoclast, ground-breaking writer/satirist, producer, star of radio and screen, voice-over legend, and that's just the tip of the Freberg. The breadth of Stan's career cannot be covered in a single blog post (nor an entire blog) but a good way to get better acquainted with the man is to visit prolific writer Mark Evanier's excellent POV Online series: The Stan Freberg Discography.

Mark also runs one of the best daily blogs on the internet News From ME which often brings news of things Freberg, such as Stan's appearances and updates on his continuing voice-over career on The Garfield Show, for which Mark is Supervising Producer. 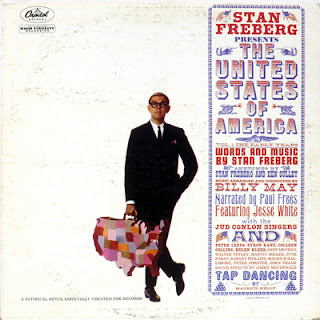 The comedy recording EVERYONE should own.
Image courtesy of flickr.com user "Epiclectic"

Should you choose to know nothing else of Mr. Freberg's oeuvre, pictured directly above is the album art for essential listening: the comedy album masterpiece Stan Freberg Presents the United States of America, Vol. 1. The recording remains as funny and fresh as the day of its original pressing in 1961: a sharply comedic, musical theater of the mind performed by a cast of some of the finest actors to ever step in front of a microphone. Here, Stan's precision sense of comic timing is front and center by way of impeccably placed music cues, pauses, and characters stepping on the dialogue of others in just the right places.

To celebrate Mr. Freberg's Birthday, I've embedding an audio clip of an interview that has not been widely heard in over 50 years. It originates from a 1957 series of radio programs broadcast from Disneyland, hosted by the multi-talented Wally Boag, comic star of The Golden Horseshoe Revue (you can expect to see more here on Wally very soon). 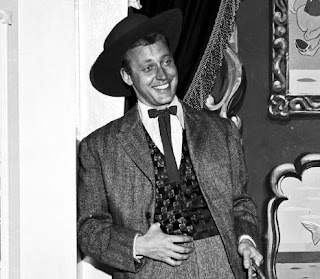 Here Stan recounts some of his own hit parodies with Wally, gives Disneyland a run for its money, and recites a comedy bit evangelizing "Three-Dimensional Radio" – a timely topic to satirize in1957, as the 3-D craze was winding down in movie theaters, just as it has begun to lose potency with viewers in 2012.

Hit the play button below to enjoy an exchange between two very funny gentlemen:

This rare audio clip comes courtesy of the lovely and very generous Carlene Thie, proprietor of Ape Pen Publishing. She graciously granted me permission to share it here on the blog. Carlene is responsible for the album from which this was made available, The Golden Horseshoe: Live in the Park is one of three CDs created from Wally Boag's personal collection of recordings. In addition to Stan Freberg, Live in the Park features Wally interviewing stars of 1957 such as Bud Abbott, The Andrews Sisters, Pat O'Brien and several more. I highly recommend picking up the other two CDs of live recordings of the actual Golden Horseshoe Revue - they're great fun! You can order them here:

Carlene's grandfather was Mell Kilpatrick, the best-known cameraman in Orange County, CA and chief photographer for the Santa Ana Register from 1948 until his untimely death in 1962. Mell's photography recorded the growth of Orange County. As country roads and orange groves gave way to major highways and the sprawl triggered by the debut of "The Happiest Place on Earth." 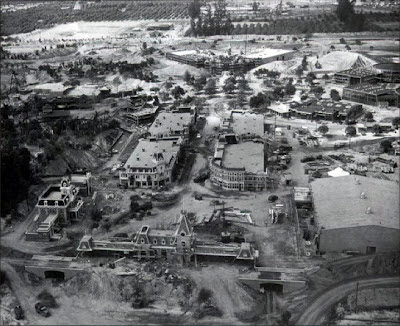 A Mell Kilpatrick photo of Disneyland under construction in 1955,
likely taken from one of the site observation towers
© 2012 Ape Pen Publishing
Image courtesy of Amazon.com

Mell’s widow gave Carlene the entire set of negatives and photographs. Soon after, Carlene opened Ape Pen Publishing Company to produce five stunning books showcasing her grandfather's vintage Disneyland photography. The books are a labor of love, and provide a never-before-seen look at Disneyland during construction and in its earliest years of operation. Ape Pen had also organized events, and produced a selection of exclusive media to the delight of Disneyland enthusiasts and historians everywhere. You can browse their selection of books, photos, CDs, DVDs and much more right here:

Upcoming articles focused on the Golden State are planned for this blog. Perhaps we'll see if Carlene would consider an interview about her Grandfather's invaluable contribution to the legacy of Orange County for a future post.
Posted by Dan at 12:46 AM No comments: