Sugar and Spike (and Sheldon Mayer!) Part I 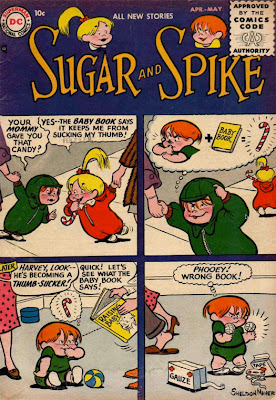 Long before the 1991 premiere of Nickelodeon's Rugrats, another set of diapers toddled across suburban carpets, snuck out of play-pens and spouted the secret language of baby-talk. Sugar and Spike appeared for the first time in their own self-titled comic book in the Spring of 1956.

Sugar and Spike was created, drawn and written by DC Comics stalwart Sheldon Mayer, whose comic book work spanned the broadest of genres, from action to horror to teen humor to funny animals. The fact that his output was successful in any genre he touched is a testament to a creative who was a loyal employee, yet very much an individual.

The Sugar and Spike tales flowed exclusively from Mayer, who had a contract stating no other artist or writer could produce stories featuring his toddler characters. That's a rare sort of deal to cut (then or now) for a property that the publisher owns outright, but Sheldon Mayer had more than earned his place at DC as a prolific writer, artist and editor for many years. Of his many contributions, one milestone in particular helped earned him credibility and the right to retain creative control over Sugar and Spike. In 1938 it was Mayer who convinced publisher and comics pioneer M.C. Gaines to feature a syndicate-rejected character in their upcoming anthology title, Action Comics. It was a pretty good suggestion... when Action Comics #1 hit newsstands on April 18, 1938, it became an overnight success thanks to the debut of that rejected character: Superman.

Ten years after helping bringing the Man of Steel to the world (and plenty of moolah to DC), Mayer had left editorial duties behind to devote his attention to writing and drawing full-time. He was working as artist and writer on DC's humor comics Funny Stuff and its spin-off, The Three Mouseketeers. With a cartooning style that was attractive, conservative and careful, he knew how to get the most out of any design. The most telling signature of his cartooning was a character's slight sticking out of the tongue on the side of their mouth when shouting: 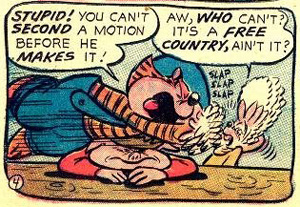 DC noticed the surging popularity of Hank Ketcham's Dennis the Menace, and looked to publish something of a similar tone. Mayer was up to the task and developed a pair of curious babies discovering the world around them, rather than repeating Ketcham's theme of a singular mischievous adolescent. The decision to use toddlers as the main characters was unique and inspired, especially since there were already many Dennis clones surfacing in other comics. Mayer did take an inspirational cue from Ketcham: just as the antics of Ketcham's son was a model for Dennis, Mayer's early home movies of his children Merrily and Lanney proved the perfect launchpad for his new comic creation. After Sugar and Spike was approved and assigned exclusively to Mayer, another cartoonist named Rube Grossman was assigned to take his place on The Three Mouseketeers book. Grossman's work was competent, but lacked Sheldon Mayer's appealing style and loopy storytelling pace. As a result, The Three Mouseketeers title only lasted about four more years.

With full creative and artistic control, Mayer's playful style of cartooning allowed Sugar and Spike stories to keep grounded within a pint-sized view of the adult world, later stories had no problem crossing into the realm of the fantastic. The misadventures of Sugar Plumm and Cecil "Spike" Wilson are the stuff of pure enjoyment, subscribing to the theory that ALL babies speak their own language, so an encounter with a young kitten or baby whale meant the tots could communicate with the animals directly. We readers were on the secret, for their parents and the grown-ups who inhabit their world dismiss their language as "meaningless baby-jabber," hearing nothing beyond oft-repeated phrases like Sptzl! Flrbsh! and Glaaah! Both kids were never mean or malicious, Spike was the more passive and naive of the pair, while Sugar tended to be a bit bolder and acted as instigator to making mischief with "Doll-Boy" (her pet name for Spike).

Charles M. Schulz used a technique in the Peanuts comic strips, in which adults were present, but always out of frame. The initial format of Sugar and Spike stories utilized a variation on that device: the faces of adults were cut off by the tops of comic panels or obscured by dialogue balloons and other objects. This device was possibly chosen to depict how babies see the adult world: from the knees down. Mayer later chose to break out of this formula slowly, first, a few antagonistic adult characters were shown in full, then more adults, until finally the Plumm and Wilson parents received consistent designs and were drawn in completely 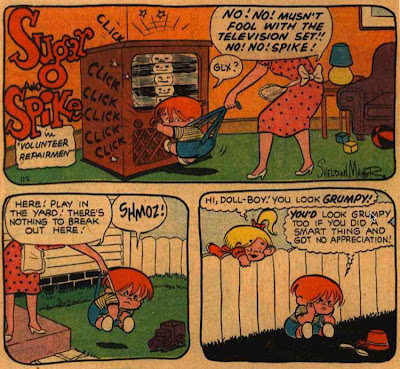 An example of obscured grown-ups from Sugar and Spike #18
Image © DC Comics Inc.

Participation was a large component of the book's success, as Mayer invited readers to send letters, participate in contests, send in outfit designs for the babies and fill in blank captions on half-page comic strips. Names and hometowns of participants were always credited, and likely fueled higher sales of anxious readers to see if their contribution was included in the latest issue. Sugar & Spike proved to be not only entertaining, it was the most interactive comic book since Bill Woggon's Katy Keene.

Sugar and Spike ran from 1956 to 1971, resulting an impressive 98 issue run. This is exceptionally impressive in this era of corporate synergy. During the comic's 15-year run, there was never a television show, dolls or any other merchandise tie-ins to the characters. More on that next time.


Until the next Sugar & Spike post, here's a complete six-page story to tide you over: Sugar & Spike in Beatin' Eatin' courtesy of the must-click Easily Mused blog. You can also experience the first 10 issues of Sugar and Spike by picking up The DC Archive Editions: Sugar and Spike Archives Vol. 1, a handsome, 264 page hardcover collection released late last year, Worth every penny - and that's not a buncha pablum! 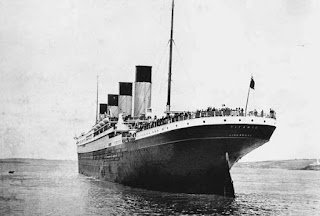 P.S.
The photo of the original Titanic heading this post was taken by Father Browne, whose remarkable life and photographs you can read about here: http://fatherbrowne.com/. Father Browne sailed on the Titanic from it's London embarkation as far as Cobh (a seaport town in County Cork, Ireland), and took many photographs on board which you can see here: http://titanicphotographs.com/. Sift through the menus on the left, to learn of the "divine" intervention that prevented Father Browne from continuing on the voyage, a command that very likely saved his life!
Posted by Dan at 5:31 PM No comments: