Got Donald Duck Adventures #5? WHICH ONE?

Joe Torcivia's The Issue At Hand Blog featured a fascinating post last week, on the many U.S. versions (11 total) published of a Mickey Mouse comic strip-turned-comic book tale, the well-researched details of which you can (and should) read here: Comic Book Letter of Comment: “Island in the Sky" 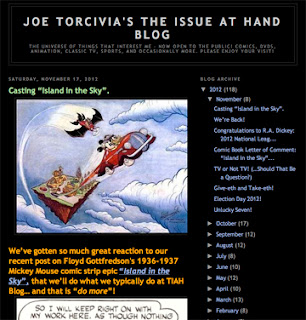 I left Joe a comment or two, and mentioned I was working on my own post about the "Jekyll-and-Hyde" era in which the Walt Disney company decided to try out self-publishing their own comic books during the collector's boom of the early 1990s. That article will be featured here in the future—while I'm still doing a bit of research to put that together, I knew there was a particular aspect to the marketing of those books that required some explanation, had one not been around to witness the transitions. I felt it constituted it's own post, to clear up the confusion. 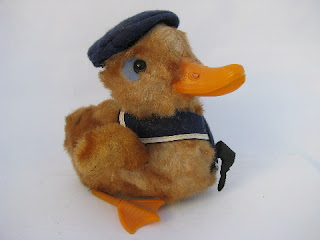 "Aye, mates: bite off a cork, and settle down on th' bulkhead... 'tis a grand, sweeping yarn of confusin' back and forth, ta hear told. From publisher, to new publisher, back again, to yet another new publisher. Ancient shipping routes be easier to foller, sez I."
– Cap'n L'Orange

He's speaking, of course, of how in the world you can keep track of collecting the comic book Donald Duck Adventures.

In 1985 the (dormant) U.S. license to publish Walt Disney comic books was granted to Another Rainbow Publishing, to be published under the imprint of Gladstone** comics. After two Disneyland-themed prestige and digest specials, the monthly titles first appeared in July of the following year, consisting of the "core four"  U.S. Disney comic books: Mickey Mouse, Donald Duck, Uncle Scrooge and Walt Disney's Comics and Stories. Each book resumed the issue numbering from the point the prior run ended in 1984 through Western Publishing's Gold Key/Whitman line. So Mickey Mouse #218 (July 1984) published by Whitman, resumed two years later with Mickey Mouse #219 (July 1986), under Gladstone. 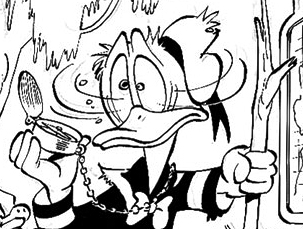 It was an outstanding presentation of comic books with both the casual fan and the collector in mind. The core four started out with Donald Duck and Uncle Scrooge title rotating formats from month to month: if Donald Duck had a full-length adventure tale, Uncle Scrooge featured two or three shorter stories, the following month, Donald Duck contained several shorter stories and Uncle Scrooge showcased a book-length adventure. This was the cycle for the first year of Gladstone comic books, and it worked well. By the summer of 1987, DuckTales was set to premiere on worldwide syndicated TV, with much marketing hoopla. Through Gladstone, a new comic book was planned to be released to tie into the show, which, though featuring several new characters, shared much connective tissue with the world of Walt Disney comic books. 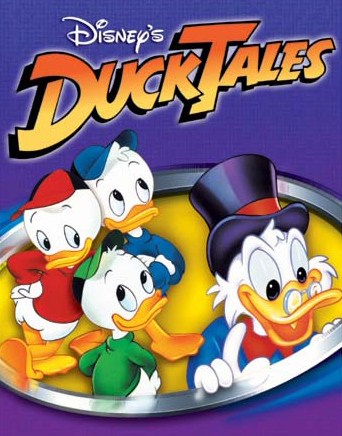 DuckTales Was a Partial Impetus for the Genesis of Donald Duck Adventures
©Disney, Image Courtesy of TV Shows on DVD

Since the DuckTales comic focused on the TV animated version of Uncle Scrooge sans Donald Duck, it was decided to give Donald a companion book as well. Not long before the first issues were supposed to hit the stands, a decision was made to add a third new title, delaying the DuckTales comic book (possibly due to brand-new stories featuring Scrooge with the DuckTales cast were not ready to print?), prompting a shift from the format cycle mentioned earlier. 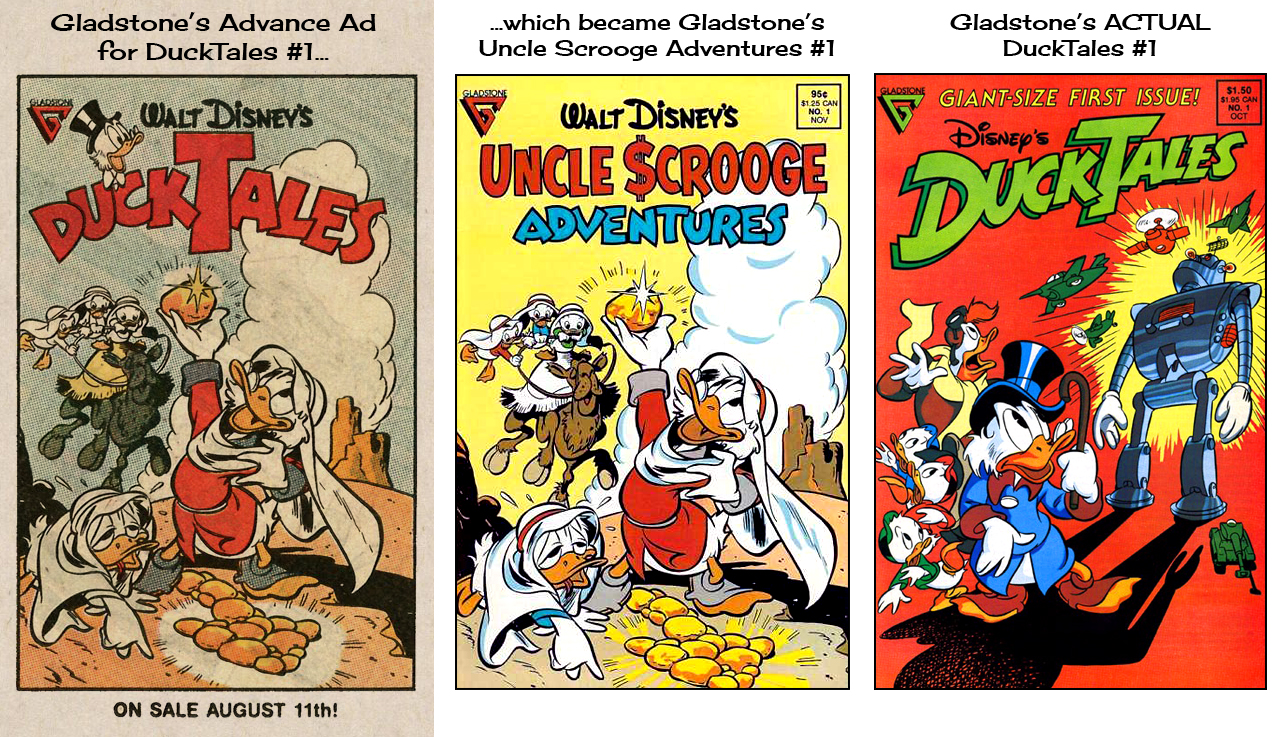 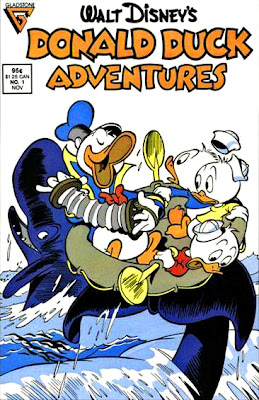 It was around this time that Gladstone had expanded their format offerings, having done away with digest-sized books, and beginning a series of large, square-bound books: the Gladstone Comic Albums. Rotating themes and characters throughout the anthology series, issues #5, #10, #13, #16 and Giant Album #5 were titled Donald Duck Adventures. 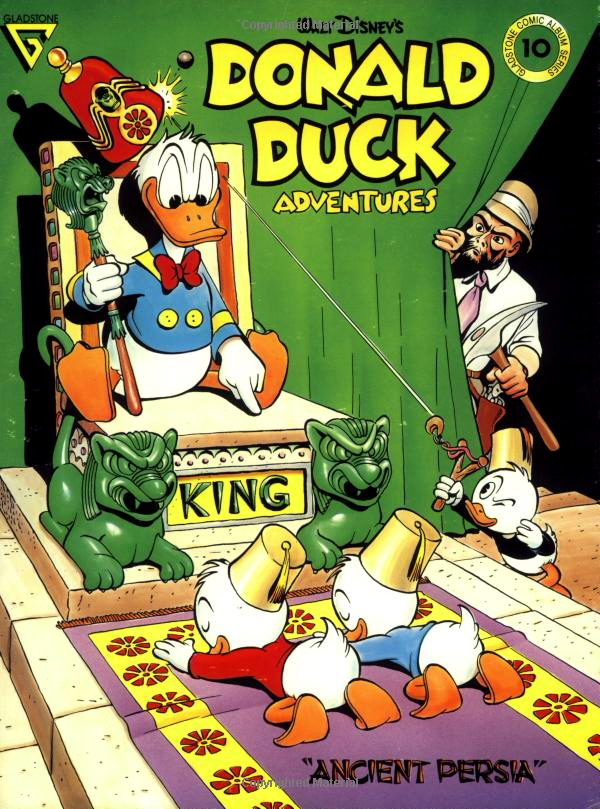 The Gladstone comics were a solid hit, and The Walt Disney Company noticed this, along with all the growing attention the comic book collector's market had been receiving in the past few years. Disney had established and begun grown their own publishing arm, and by late 1989 had informed Another Rainbow/Gladstone they would not renew their license to publish Walt Disney comic books: Disney had decided to publish the comic books themselves.

Gladstone's Donald Duck Adventures ran from issue #1 to #20, and the final Gladstone comic books were released at the start of 1990. By Spring, the new, Disney-published books debuted under the imprint "Disney Comics," boldly launching eight monthly titles.

* O.K. folks: right here's where you need to start keeping track of things *

With the exception of the long-running Uncle Scrooge and Walt Disney's Comics and Stories, all the Disney-published titles reset their issue numbering to #1, for consistency's sake and (more likely) to capitalize on the collector's market. The Mickey Mouse and Goofy books officially added "Adventures" to their titles, justifying the issue #1 designation. BUT Gladstone had already been publishing a Donald Duck Adventures comic in addition to the standard Donald Duck book! In spite of this, Disney Comics chose to start again at issue #1. Disney Comics did the same #1 numbering reset for the DuckTales comic book, which had reached issue #13 by the end of Gladstone's run. 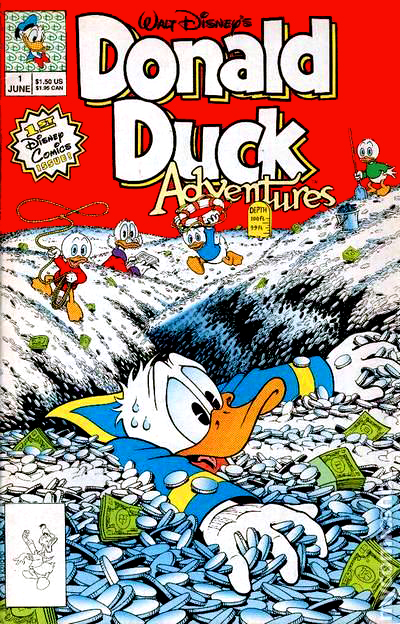 This is where the confusion for collectors and completists really began!

Halfway through the course of the Disney Comics years (1990-1993) their infamous "implosion" took place, and a new license was granted to Another Rainbow/Gladstone to publish an affordable, prestige format album collection of the entire comic book work of Carl Barks: The Carl Barks Library in Color. The title of the portion reprinting the work from the Donald Duck segment of the collection? The Carl Barks Library of Donald Duck Adventures in Color. This was the signal that soon heralded the liquidation of the self-published Disney Comics line, and a return of the standard comic book license to Gladstone in 1993. 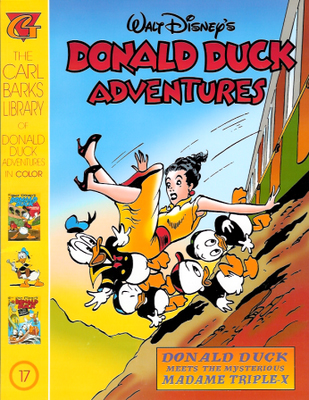 The Disney Comics issues of Donald Duck Adventures ran to issue #38. Gladstone quickly re-launched their core titles in the Summer of 1993. Armed with a re-worked logo and higher-quality white paper, Gladstone resumed their original numbering system of Donald Duck Adventures title with issue #21 (rather than continuing the Disney Comics independent numbering system). 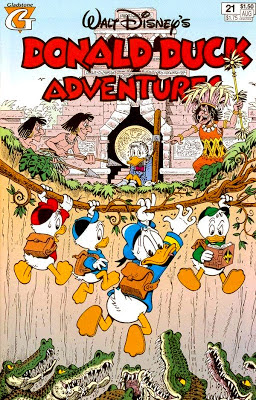 This series of books has been come to be known as "Gladstone II" in collector's circles. The Carl Barks Library in Color album series was completed in 1996, and the monthly Gladstone II comics ran until mid-1998, when the publishers decided not to renew their license due to a continually strained relationship with the licensing department at The Walt Disney Company.

The U.S. Walt Disney comic book license laid dormant once more until 2003, when it was negotiated and acquired by high-profile Baltimore comic book distributor Steve Geppi. The "core four" monthly titles returned under the new imprint of Gemstone Publishing. Gemstone's 2003 give-away title for the annual Free Comic Book Day was... what else? Donald Duck Adventures! 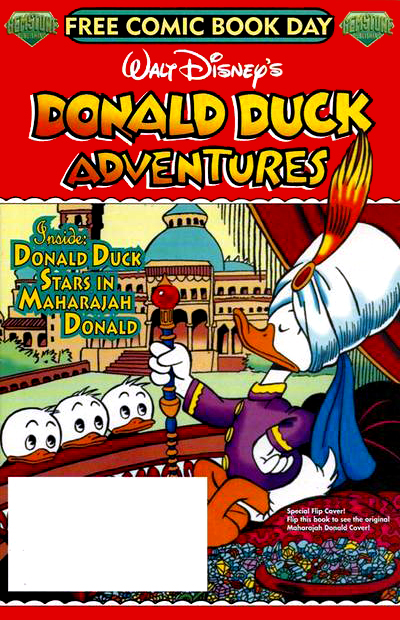 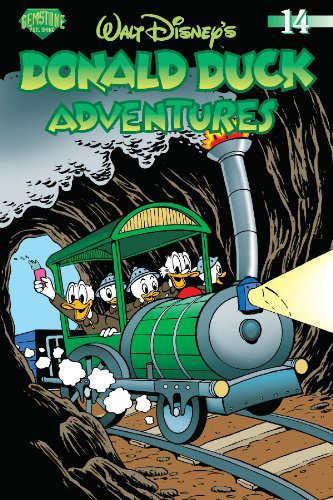 During the course of the Gemstone years, several well-done seasonal annuals and one-shots specials were produced, including an interesting notion passed down from the Gladstone days: an anthology series printing a Carl Barks tale, followed by the sequel to that story by Don Rosa. Thus began a series of prestige comics titled The Barks/Rosa Collection. Volume 2 (and the scheduled, but never published) Volume 5 of The Barks/Rosa Collection were sub-titled... all together, now: Donald Duck Adventures 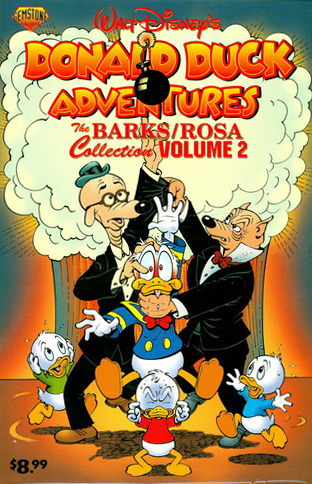 The Barks/Rosa Collection Volume 5 and several other previously announced comics never made it to the printer's press: due to Geppi's myriad investments, his company faced serious financial problems. By the close of 2008, the Gemstone line of Walt Disney comics quietly disappeared.

Thus ends the saga of Donald Duck Adventures as of late 2012. It becomes clear why collectors may have become misguided their search and/or distinction of which is which, especially since there are multiple issue #1s. But the capper is that there are SIX DIFFERENT instances of Donald Duck Adventures #5 —and we can unofficially count SEVEN, as the unpublished Barks/Rosa Collection Vol. 5 shows up frequently on Internet searches. Click to enlarge and observe:

Man, it's enough to drive a comic collector/completist to stick his own head in a mylar bag and board it. Hopefully, they find their way here before that goes down.

Epilogue: BOOM and Beyond (Present Day)

BOOM! Studios was the latest publisher to publish under the Walt Disney standard comic book license, but they have spared us a lengthy entry in this post, since they chose NOT to use Donald Duck Adventures as a title during their run, opting for Donald Duck and Friends, Donald Duck Classics, or just plain ol' Donald Duck. BOOM! has since moved forward with other licenses, leaving the future for U.S.Walt Disney comic books wide open.

That day will come... and once they've restored the "core four," I'll bet whomever the next Editor-in-Chief is, they'll peruse the list of options, and swiftly select Donald Duck Adventures as an upcoming title in the newest line-up.

* During the course of writing this, I've become fascinated by the potential of Cap'n L'Orange... he'll very likely show up here again.

**  Another Rainbow named their comics line Gladstone after Donald Duck's first cousin with insufferable good luck: Gladstone Gander.
Posted by Dan at 11:57 AM

But even I never fully realized just HOW MANY different incarnations of this title there actually were!

Certain oddities within the realm of comic book collecting become lost to time – like that fact that TWO consecutive issues of UNCLE SCROOGE (Whitman Era) were released on the SAME DAY… and this happened TWICE! The convolutions of DONALD DUCK ADVENTURES made that title a likely candidate for a similar fate. I glad you’ve cleared much of that up for folks who “weren’t there”!

If this is any indication, bring on the overall Disney Comics post!

I’ll be back… regularly!

Thanks so much, Joe, for your kind words and linking the post to your blog! The Donald Duck Adventures saga would have really overshadowed the Disney Comics post, it works much better as a stand-alone piece. I know my Walt Disney comics history pretty well, but this compelled me to pull out the ol' Overstreet Price Guide off the shelf several times.

Y'know, I'd heard of the Whitman Era dual releases: precious little info seems to be available on those last few years Western put the comics out... by then, the Disney Studio seemed to put more effort/supervision into their overseas comics than their U.S. output.

Cap'n L'Orange and I got loaded on dime cigars & rotgut overnight. I gave him your best regards in which he raised a vodka-soaked wing to give the best salute a seafaring old duck could muster, then fell right back to sleep. We both appreciate your visiting here - Dan

I look forward to your Disney Comics post. Those were harrowing and often confusing times. And I had a front row seat (which I dubbed being Guardian of the Crossroads) and even helped organize some of the panels on Disney comics for Comic Con. It was a rather wild ride as various factors collided. Those were the days. Sad now nobody seems to want the domestic license and I hear even sales in Europe have lately taken a tumble.

Great to hear from you, Dana: I remember seeing your name often in the various letter columns during that time.

Print media (especially periodicals) continues to suffer some serious hits worldwide. The domestic license may be in a state of bargaining at the moment, I know it took Steve Geppi some time/negotiations to acquire it: overall we had 5 dry years between Gladstone II and Gemstone.

What's encouraging for future projects is that the Fantagraphics Barks and Gottfredson series are selling well, widely available, and receiving excellent reviews all around.

Personally, I believe the best route for the next publisher would be a small set of print titles and a digital expansion of the comic titles via online readers such as comiXology. Headed up by the right team who know the material, another shot at a Walt Disney comics line can be successful.