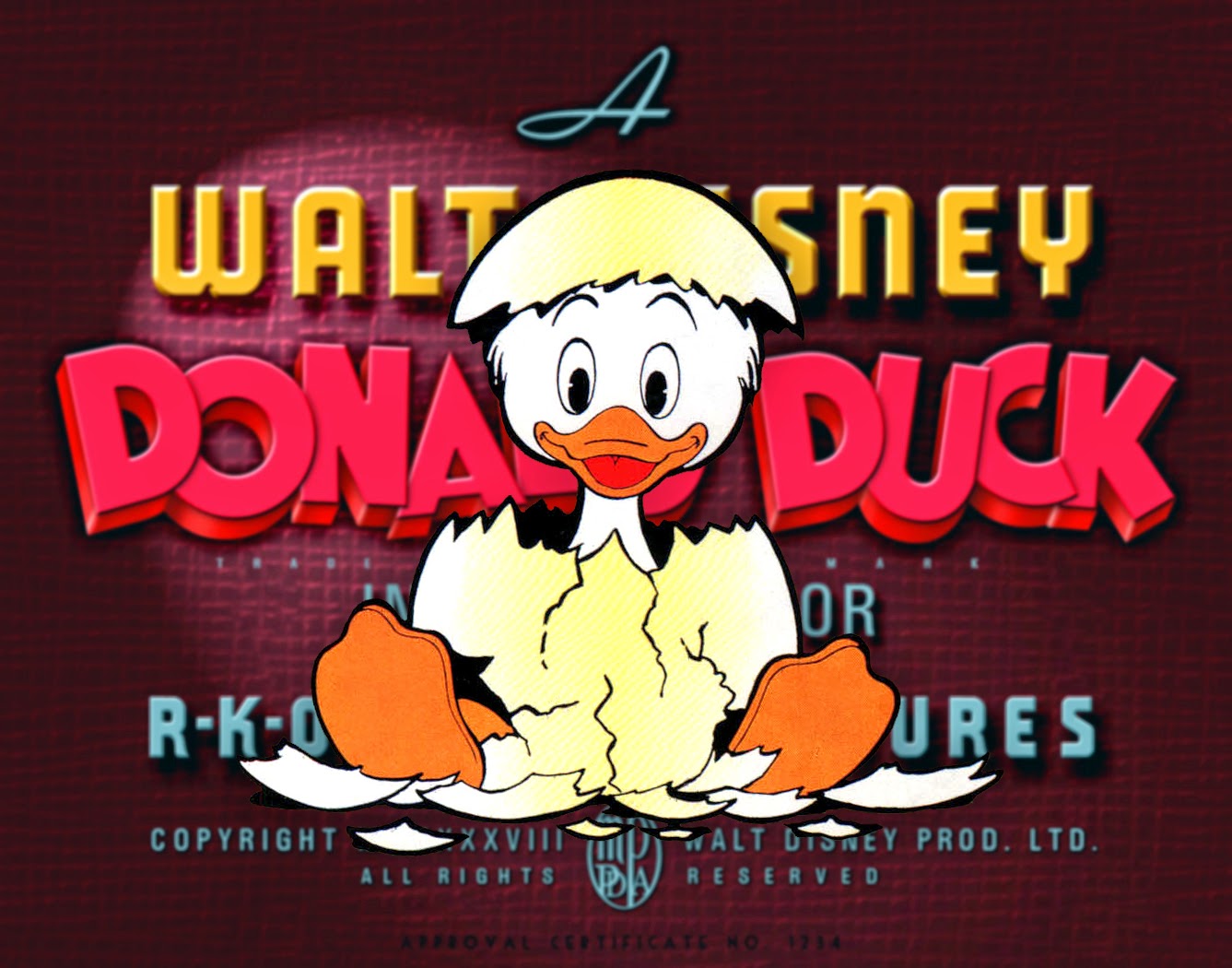 June 9, 2014 marks the 80th anniversary of Donald Duck's first on-screen appearance, and is considered his official birthday by the Walt Disney Studio. While Donald's 80th may not match the spectacle of his 50th Birthday celebration in 1984, you'll surely come across some good wishes bestowed to the irascible duck online today. 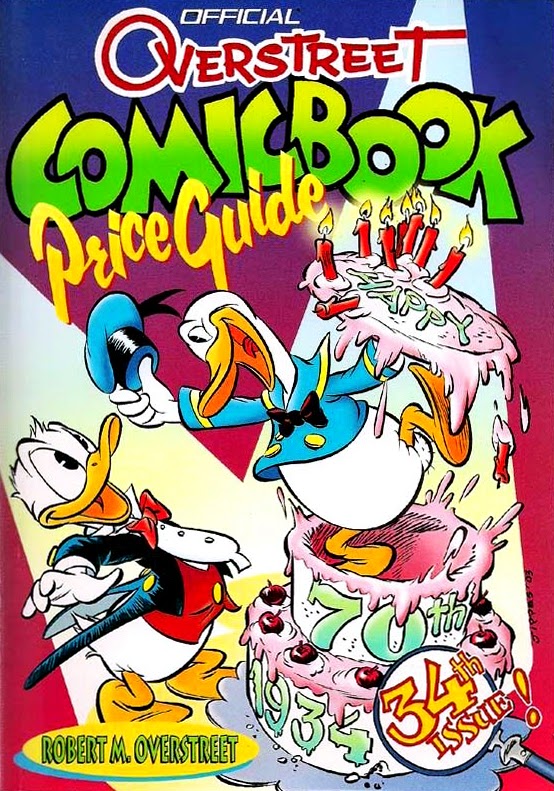 There are countless excellent resources online and in print chronicling Donald's history—so, rather than regurgitating information that's readily available, I've prepared something special to commemorate the day. That's right: it's Donald's birthday, but today you, the readers receive a gift! 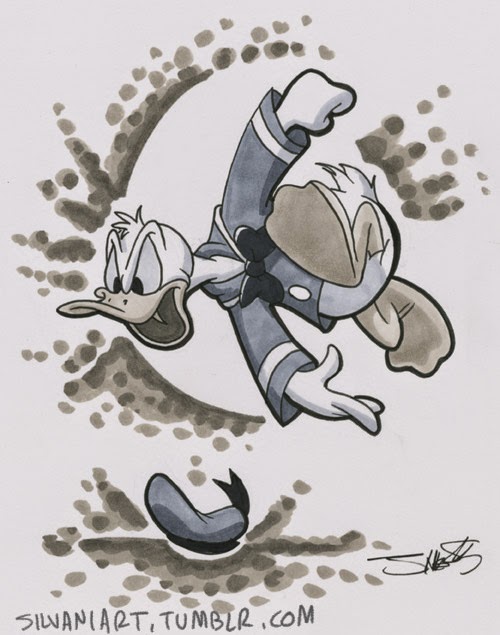 "DOGGONE IT! WAAAAK!!! WAAAAAKKK!!!
Donald's Most Memorable and Relatable Quality is His Short Temper: Throwing the Epic Fits of Frustration We'd All Like to Throw
Artwork by James Silvani
© Disney

At the end of the post is a link to download something I've scanned and compiled as a PDF: a rare, six-page article from a 1991 issue of Filmfax magazine focused on the duck himself, and one of the people who best knew Donald at his core.

Nope, not Carl Barks this time... this article is about Clarence "Ducky" Nash. 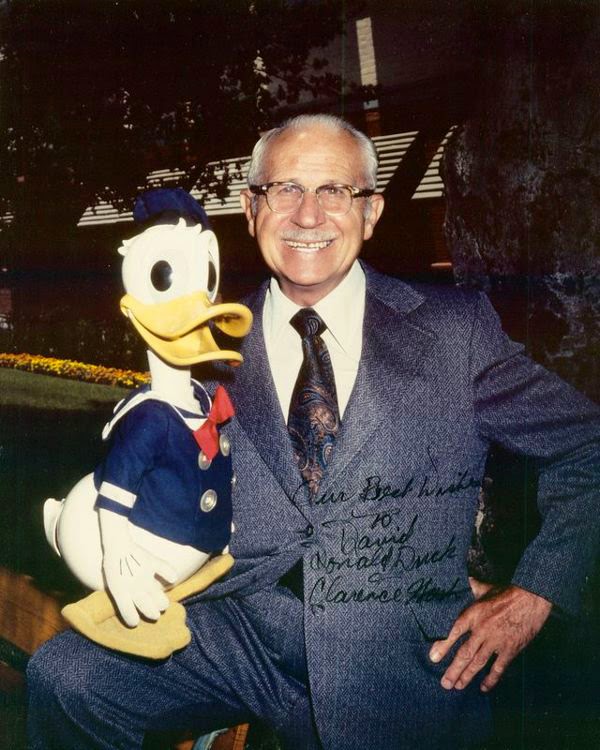 
Prior to obtaining a full-time gig as the world's most famous duck, Clarence Nash was a versatile radio impressionist and a publicity figure for the Adhor Milk Company. With the benefit of a rural upbringing, he learned to produce remarkably convincing animal sounds ranging from horses to frogs, and parlayed those into entertaining voices and routines. His rendition of a baby goat on The Merrymakers radio broadcast in 1934 would change the course of his life: that performance clinched him the role as Donald Duck. 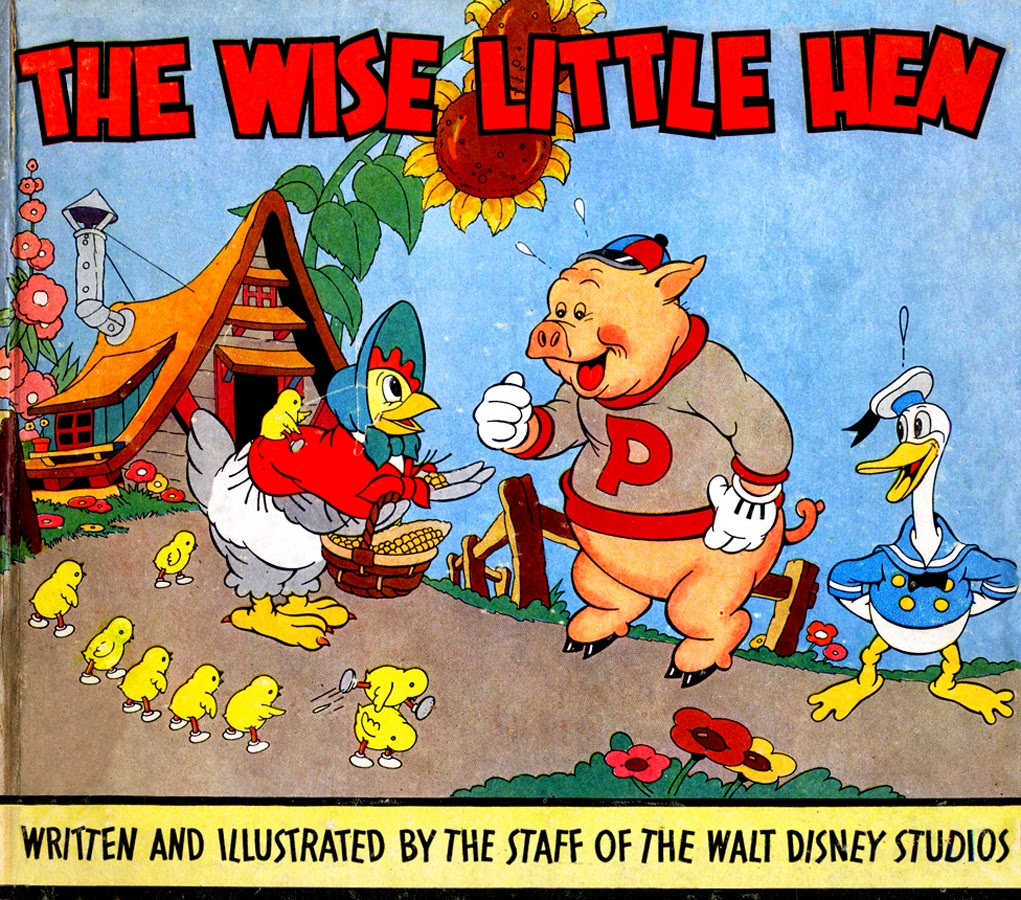 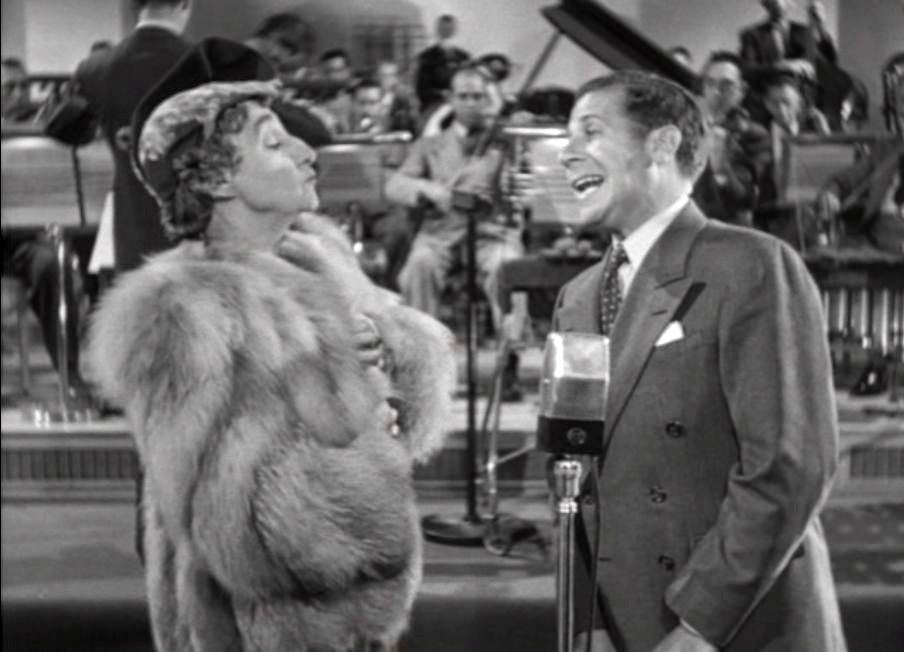 It was a role Nash would maintain for the next 51 years via film, television, radio, records, theme parks, goodwill tours and hospital visits to ailing children. He also had the rare opportunity to be the sole actor to dub Donald's dialogue in foreign translations of the cartoon shorts, done so by speaking the dialogue phonetically (the duck's tantrums, however, remained as the same recordings—they were universal in ANY language!) 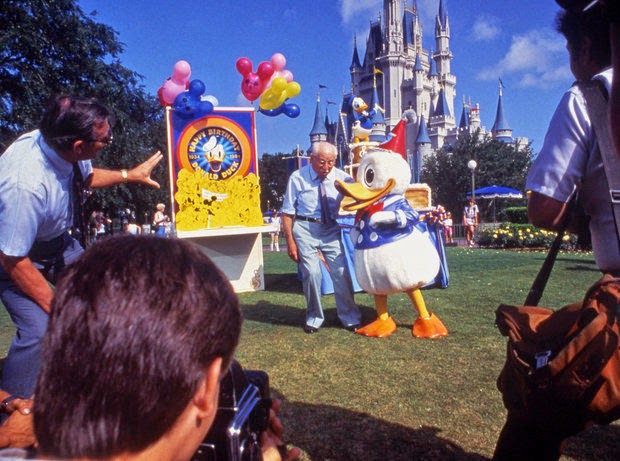 By clicking the text link below the Filmfax magazine cover, you can view or download a 6.4 MB PDF of the six-page 1991 article. Sized for clarity to read online or print out, it provides unique quotes, photos and a nice history of Clarence and Donald's years together, right up to Nash's passing in 1985. The article starts out with a surprising anecdote documenting a heated disagreement Nash had with Walt Disney, with an outcome that might take the wind out of the sails of Walt's detractors. Click on the link to find out more: 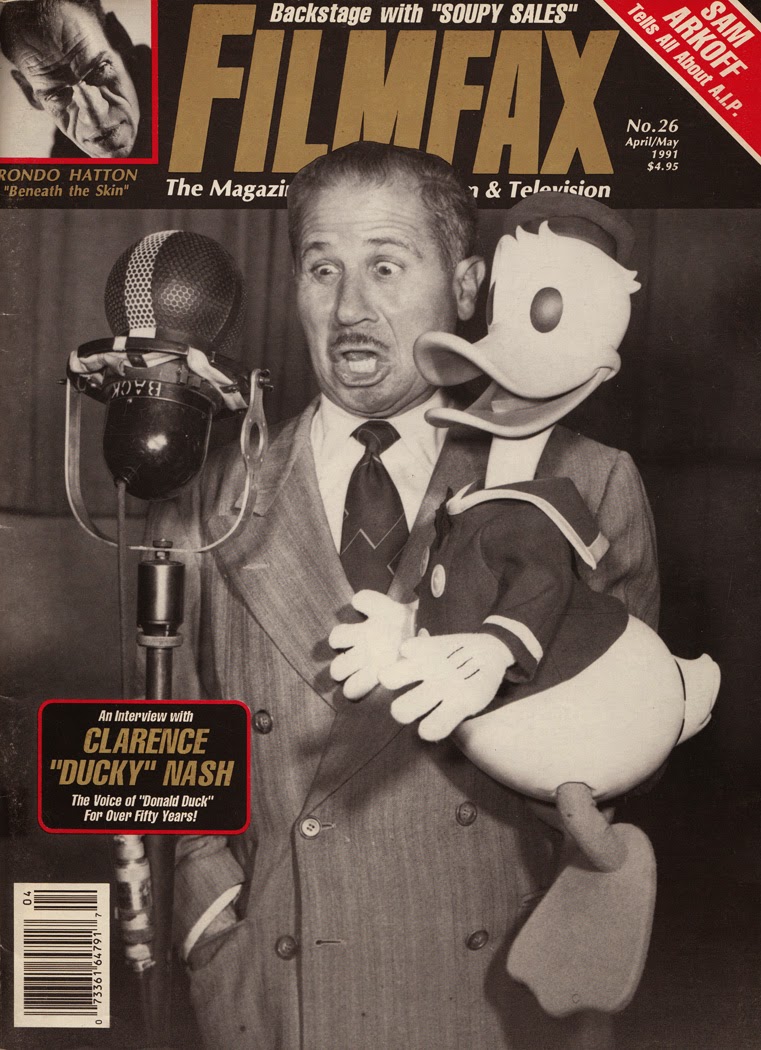 With that, let's all wish Donald a Happy 80th Birthday. Since this is a happy occasion, we'll close with another rarity... a moment of peace in the Duck family household! 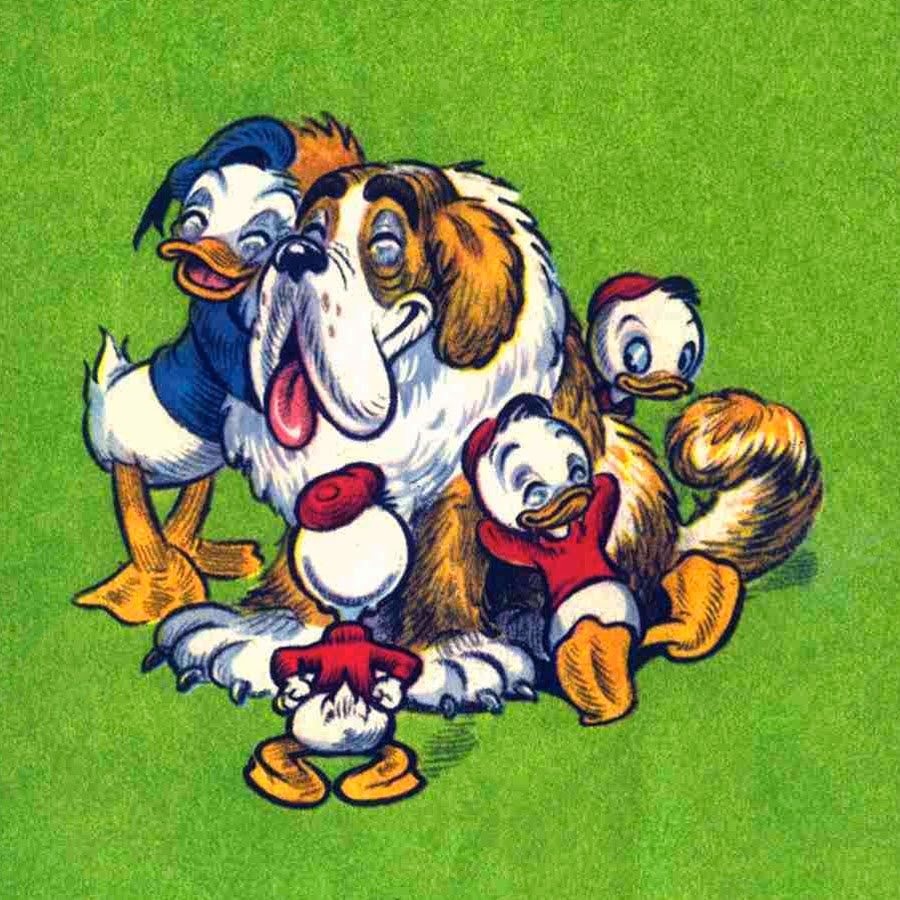 I've always found it fascinating that the foreign dubs contained Clarence Nash's distinctive Duck sound. He was truly "one of a kind."

Why are the 80th birthdays of Mickey and Donald receiving so little fanfare? The 40th, 50th, and 60th birthdays generated year-long celebrations, TV specials, commemmorative comic books, the works. But 70, 75, 80, pretty much nothing. Is the Disney company just plain tired of their old standbys?

Thanks scarecrow, and I agree: I can always make the distinction of Clarence Nash versus other duck voices from performers like Red Coffee and Jimmy Weldon.

The anniversary question is a great one. From what I understand, the low fanfare lies within two reasons:

1) Since the mid-1990s, the current belief that several studios have taken on (like Disney and Warner Brothers) is to de-emphasize the notion that these characters are OLD properties, which might scare off a young demographic. This became a product of the grafting of "Strategic Planning" executives, the sting of which still lingers today.

2) In tandem with this belief, Disney in particular began to get feedback (possibly data skewed by folks mentioned in the first reason) that their film and character-based anniversaries were beginning to get repetitive. This was a deciding factor to cut back on major company-wide commemorative initiatives.

Of course, celebrating the theme parks are another beast altogether, since the parks and resorts are locations and anniversary promotions are deliberately based on brand-new attractions or nostalgia. Disneyland's 50th Anniversary in 2005 was a big deal with a masterful marketing campaign and unique merchandise... the 50th Anniversary of Walt Disney World in 2021 will surely be just as big! - Dan

I tend to agree with Dan that, unfortunately, these days, no studio wants their characters to be regarded as “Old”.

To me, such longevity and staying-power was a sign of the characters’ greatness, and what set them apart from the rest! And that SHOULD be celebrated.

Does anyone remember something called “Rude Dog and the Dweebs” today? …Well, apparently Wikipedia remembers EVERYTHING, but I’d wager to say few of us “mortals” do, even the more obsessive “fannish type mortals”.

Yet, Mickey Mouse, Donald Duck, Bugs Bunny, Daffy Duck, Popeye, Tom and Jerry, Woody Woodpecker, Yogi Bear, The Flintstones, and Rocky and Bullwinkle will likely ALWAYS be known… even if they aren’t appreciated as much as they SHOULD BE, today.

I’d imagine the “flip side” of this is the continuing “evergreen status” of Scooby-Doo and the gang! With new DVD releases and TV series continuing to come regularly, I could see why Warner would not want to publicize that they were originally a product of the late sixties. Yet, Shaggy is undeniably a hippie, even after all these years – and may have been the FIRST regularly featured animated character to appear as such! (…as opposed to the more clean-cut Robin the Boy Wonder and The Archies, though The Impossibles DID have long hair) Funny, how Shaggy always seemed to have “the munchies”, yet never puts on weight! Hmmmm…

Still, in typical Warner-style contradiction, they are currently promoting Batman’s 75th anniversary with lots of special products, figures, comics, books, DVDs, and more! I guess, if there’s enough money to be made, such celebrations are still okay!

75 years? Say, pretty soon, Batman will be as old as he was in BATMAN BEYOND!

ALL too true, Joe! I'm afraid it's the classic example of "the tail wagging the dog" In *most* cases today, the Consumer Products division of a company dictates the tone and content of new animated projects.

Interesting you should bring up later-years Bruce Wayne and the world of Neo-Gotham... Paul Dini has recounted several times how "Batman Beyond" only came about because WB Consumer Products felt they had saturated the market with toys based on the original Timm/Dini/Burnett Batman Animated series. Thankfully, "Beyond" was lovingly developed by the same creative team from B:TAS and worked out very well... but it's easy to produce a poor effort doing different take on Batman, strictly because Consumer Products wants to launch a new line of merch.

What those creators did was honor the past, while reinvigorating the future... Harley Quinn made the successful move into the official DC comics canon, in fact, just this month, so has Terry McGinnis and the world of Batman Beyond!

I felt that WB and DC have handled the Superman and Batman 75th Anniversaries right: with select books, merchandise and the unique animated shorts that premiered recently.

While Bob Iger's Walt Disney Company hasn't made much of an effort to commemorate character anniversaries, I must say they've done some nice things with Mickey Donald, and the gang in the past 5+ years: the new shorts on the Disney Channel and online have given them exposure as actual, funny cartoon characters, as has "Get a Horse" which was well executed in the early Ub Iwerks style. Not to mention the re-introduction of Oswald the Lucky Rabbit is still ongoing, it's refreshing to go to Disneyland and see how children immediately know who he!

You're right on target with the Hanna-Barbera stuff, too... "Scooby-Doo" just continues to transcend generations every time: like, Shaggy is probably viewed as a throwback hipster to kids today!

When done right, "The Flintstones" are another wonderful set of characters, they just milked that cow SO hard for many years, there's a lot more BAD Flintstones than GOOD Flintstones out there.

Honestly, whatever gets re-launched or re-booted *can* work if it stays true to it's core... I can think of a lot of funny ploys Top Cat could pull off with a smart phone, or new adventures of The Impossibles as an indie band in search of a label. If the creative teams can steer clear of marketing interference, the thing to do is channel the best of what made the properties popular in the first place and use that in a way that's both timeless and contemporary.

After all, we've got NEW Rocky and Bullwinkle, Flintstones, Popeye projects coming up... at least one of them is going to get it right. Uh, right? - Dan