Behind the Scenes of The Rescuers 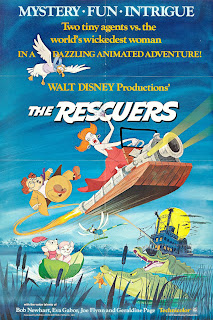 One Sheet Poster for The Rescuers (1977)
Image Courtesy of I.M.P. Awards
© Disney

A search for an item stored in the bedroom of my youth prompted the opening of a mailing envelope, steel-clasped well over a decade ago. Of the contents within, one remarkable item was an issue of Disney Magazine: a gift-with-purchase premium publication sponsored by Proctor and Gamble between May 1975 to April 1977. 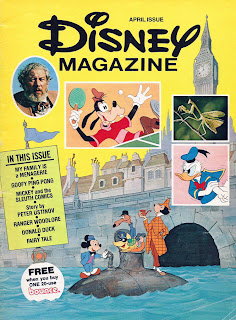 The magazine ran for 19 issues, and was free with purchase of rotating P&G products at supermarkets and drugstores—inside was an all ages affair, featuring true-life and fantasy stories, puzzles and feature articles on themes relevant to Walt Disney Productions at that time, further enhanced by special artwork from Disney Studio artists. 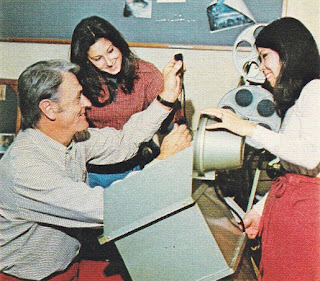 A two-page spread on the then-upcoming 1977 release of The Rescuers set off a spark, and I thought the article was unique enough to share here on the blog. While the text contains nothing revelatory, the true treasures are the photos provided showing Studio employees during production of the animated feature. 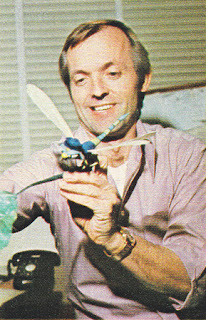 Before Leading the Infamous "Exodus" From the Studio in 1980,
Don Bluth Rose Up to the Rank of Key Animator on The Rescuers
© Disney

The (staged) photos feature the production team amongst models, sketches and storyboards, and fans of Disney history will likely get a kick out of seeing familiar faces, furniture and fixtures. Though small, they're a nice snapshot of the "old guard" transitioning the art of the craft to the "new guard." Animator Don Bluth is shown three times, a few years before his notorious exit from Walt Disney Productions in 1980, taking several members of the staff along with him—Bluth forged ahead to direct a string of animated features to become a serious contender to the Walt Disney Studio for much of that decade.


Click the text below to
view/download the 3.8MB PDF:
1977 Disney Magazine: The Making of The Rescuers 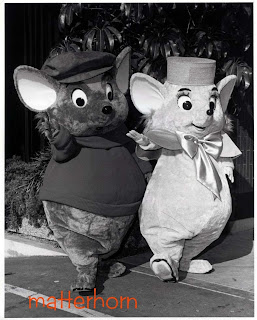 Though Attractions Never Evolved From The Rescuers, Bernard and Bianca
Greeted Guests at Disneyland and Walt Disney World for Many Years
Image Courtesy of Stuff From the Park
© Disney

While not considered a true "classic" today, the film was extremely well-received during its initial release in 1977. Compared to the Disney Studio's animated features of the 1970s, which leaned toward a method of longer segments framed within a thin plot, The Rescuers benefited from the refreshing return to a more linear and narrative storyline. What made the film further attractive was the invitation of original, full animation from a U.S. studio (a rarity during this time.) It should be noted The Rescuers was the swan song for several longtime employees of Walt Disney Productions, most notably, master animator Milt Kahl who animated the film's heavy, Madame Medusa.

Current-day master animator Andreas Deja has been sharing several blog posts on Kahl's work, and his lasting influence to animators around the world. Read a bit of analysis and insight into the character animation for Madame Medusa HERE 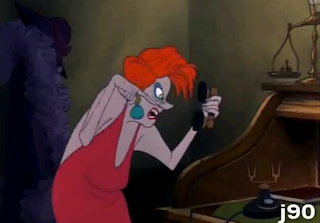 Like Captain Hook in Peter Pan, it is extremely difficult to successfully portray an antagonist with comical notes, while maintaining a true sense of menace. By virtue of his animation "acting" alone, Kahl's Medusa scenes are frequently studied frame-by-frame by professionals and students alike.

Another slice of media has surfaced in the past year stemming from the early development of the film via Huston Huddleston, the son of songwriter Floyd Huddleston. In 2011 Huston posted several original song demos by his father in early development for The Rescuers—songs tailored around the talent of Louis Prima, who portrayed the memorable voice over/singing for King Louie for the Studio in The Jungle Book a decade earlier. Floyd recorded several demos tracks, some of which were laid down by Prima himself, in character... the earliest drafts of the script featured Prima as a zoo critter, Louis the Bear. 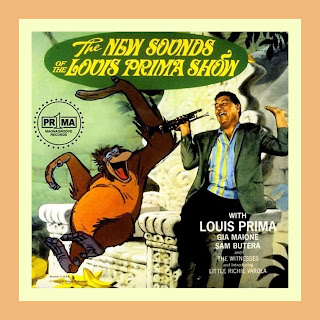 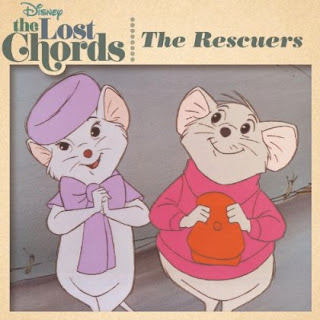 Album Art for The Lost Chords: The Rescuers
Image Courtesy of Amazon.com
© Disney

Since then, several of the original Huddleston demo recordings have seen an official digital release by Walt Disney Records as part of a larger audio project of unreleased tracks entitled The Lost Chords. The Prima material is fun and polished, but it's clear they'd be largely out of place with the tone of the final version of The Rescuers. You can sample these lost tracks on Amazon HERE and iTunes HERE

* Prima passed away in 1978, one year after The Rescuers premiered in theaters.
Posted by Dan at 1:23 AM

Above comment translated: "Thank you for sharing all [this] info!"

What a great and interesting blog. Thanks so much for putting this together. I'm researching Disney films vs. their source texts and this has been very helpful for digging into the details.

Thanks for your kind words, glad to provide any kind of assist in getting your article composed.

I confess to never having read the original 1959 "Rescuers" book by Margery Sharp, but a quick search shows that it is available on Amazon.com for purchase as a physical book and a Kindle version!

Best of luck in your research, feel free to let me know when it appears! I'll direct everyone to visit your blog in the meantime: