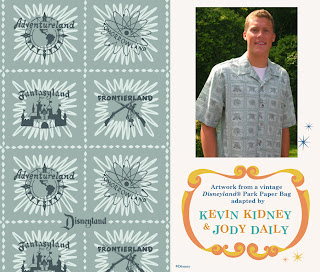 One of my favorite blogs is run by one of my favorite artists. Well, one-half of a team of my favorite artists. Kevin Kidney frequently updates and showcases art and development work created by himself and his partner Jody Daily. Do you like attractive art, colors and design? How about the Tiki Lifestyle and Mid-Century living? Want a taste of the history of Illustration, Southern California, and the many creative divisions of the Walt Disney Company you'll won't find anywhere else? Then jump over to visit Kevin's Miehana Blog.

In the past decade, Kevin and Jody have designed some of the most successful and sought-after collectibles for Walt Disney Consumer Products and Theme Parks. Their 2005 line of limited edition merchandise for the 50th Anniversary of Disneyland represent an outstanding example of high-quality items that achieved elegance and whimsy is a single swipe. Over a multi-month roll-out, each set of collectibles offered sold out quickly, many in a matter of hours. Since then, Kevin and Jody have been commissioned to produce more lines of collectibles for The Disney Theme Parks, commemorating milestones such as the 55th Anniversary of The Mickey Mouse Club, and the 40th Anniversary of the Walt Disney World Resort.

The project detailed in the image heading this post was another Kevin and Jody creation: a casual, button-down shirt utilizing graphics from an early Disneyland paper shopping bag. The artwork is stylized fun, and bears a color palette straight out of a mid-fifties swatch book. 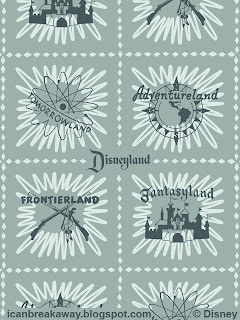 For an exercise, I decided to use the artwork from that image and re-create it as faithfully as possible. Which brings us to the purpose of this post: I've taken that vector art and created some wallpaper images for any of you to download here: Disneyland Wallpaper

There's six size formats to choose from, so one or more will surely accommodate your device(s):
Go take a look, download, and enjoy! Then make sure you drop by Kevin Kidney's Miehana* blog, unless you don't care to be thoroughly entertained and delighted.

* Dunno what a "Miehana" is? It's "Anaheim" (the Southern California city where Disneyland is located) spelled backwards! The Miehana was a special Rum-based cocktail created by Jeff "Beachbum" Berry for a 1996 exhibit of Polynesian style in the Anaheim Museum. It was later honored in 2004 by an exclusive Tiki mug designed by Kevin and Jody.
Posted by Dan at 6:29 PM