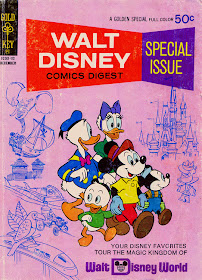 In the previous post on Western Publishing’s Disneyland-themed comic books, we concluded with Walt Disney Productions buying back Western’s share of the theme park from the Disneyland, Inc. venture. But the story doesn’t quite end in 1960—Western continued their license to publish Walt Disney comic books until 1984. Many changes took place in those intervening years of 1960 to 1984: not long after the era of the Dell Giants faded away, so too did the Four Color series, as Western chose a new direction with their comic book licenses. With that, their efforts took a noticeable shift in design and content. But Western wasn't quite done with theme park-centric comics... The changes that took place were certainly motivated in part by the influx of cash to Western from the Disneyland, Inc. buyout at the start of the 1960s. Another factor was the huge profits pouring in as a result of gaining the publishing rights to the popular and wide variety of properties from the new television animation studio Hanna-Barbera. These parallel circumstances provided Western with both financial and bargaining clout during contract re-negotiations with Dell Publishing. The specific details of the split are unknown, as business records of their negotiations have been lost to time, but Western's leverage powered a decision to make a bold maneuver. Western would terminate their decades-old financing and distribution agreement with Dell at the end of the current contract. By the summer of 1962, Western pulled the majority of both their licensed and original material comic book lines from Dell and transitioned the titles to a new, in-house comics imprint: Gold Key comics. 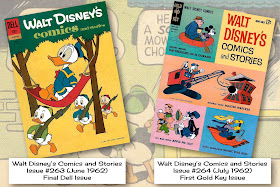 The sudden switch-over of well-known titles from Dell compelled Western to make Gold Key comics stand out on the racks for consumers—which they certainly did. Editors and artists percolated some wild design experiments with post-modern graphic and title treatments (sometimes within the comic stories themselves), plus more painted covers for standard titles, as well as testing other formats of comics. One format that found their way back into the mix were 80 page specials, including the popular annual holiday title Walt Disney's Christmas Parade. 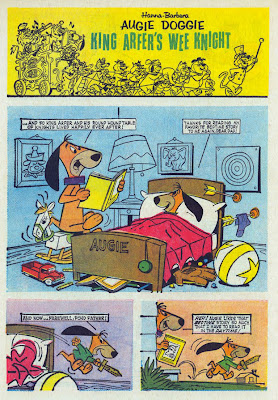 By 1960, Disneyland was a globally recognized name, and any comic book promoting the park was extra frosting on an already exquisite cake. Since Western no longer had a financial stake in Disneyland, there wasn't a huge priority to put together a new comic book that promoted the park. Nor was it deemed necessary to pull from their resources of artists and writers working on comic adaptions promoting Walt Disney's newest animated fare such as Professor Ludwig Von Drake or characters from features like The Sword in the Stone. 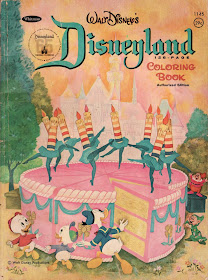 
That's not to say Gold Key didn't pay the park any respect on its 10th Anniversary... 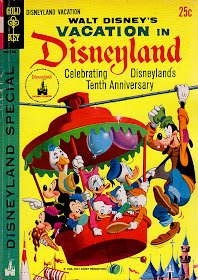 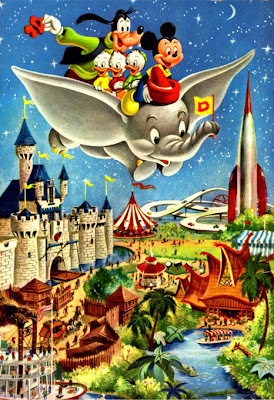 Therefore, no original artwork or stories were created for this special. Something not often considered during this era is the most unfortunate aspect of the topic at hand: the absence (and endless potential) of any new Disneyland-themed comic stories and art related to all the attractions added to the park during Walt Disney's creative explosion of the 1960s.*

The 1965 special was the last dedicated, stand-alone Disneyland-theme comic book Western produced. By the close of the decade, the comic book industry began to deal with a series of blows, the largest of which came by way of distribution: drugstores and newsstands were ordering less titles and/or lower quantities of comics. Since retailers received much higher profits from selling magazines with a cover price of 50¢–$2 than 12¢–15¢ comic books, simple business math dictated more money per month if magazines occupied valuable display space on their racks instead of comics books. 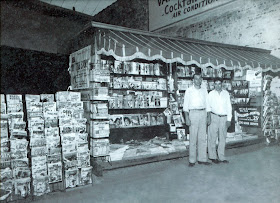 By the Mid-1960s, Drugstores and Newsstands Began to Reduce Space for
Comic Books to Accommodate Profitable, Higher-Priced Magazines
Image Courtesy of Detective27.com

This trend did not go unnoticed nor ignored by the major comic book companies. Marvel, DC, Archie, and Gold Key quickly reacted by:
In addition, Western condensed and cut back their regular titles. They had already been shrinking the page count of their Giant size specials incrementally through the 1960s, by the last few issues of the Gold Key iteration of Walt Disney's Christmas Parade, the annual lost it's heavy card stock covers and had dwindled to a standard 36-page count. The days of 100-page Giant comics with original material were over—but as a result of the alternative formats experiments mentioned earlier, new and classic content found a new life, with the introduction of Walt Disney Comics Digest in May of 1968. 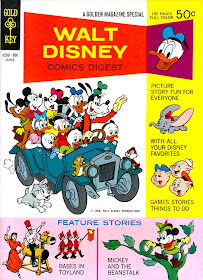 With a price point of 50¢ and the first few issues clocking in at a whopping 196 pages, the digest format proved a mighty solution to the problems of stocking and distribution: retailers wouldn't have as much of a problem ordering several copies of a 50¢ digest that earned higher returns and took less space to display. It also provided the perfect forum to recycle Western's nearly 30-year library of Walt Disney comic art, with a selection of newer 2-tier stories that took less time to produce. Even the contents of the Dell Giants found their way into the books in their entirety, including occasional reprints of the Disneyland specials. 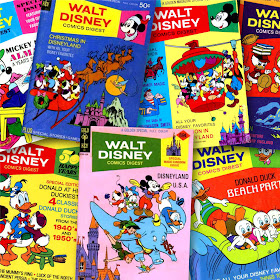 Of course, by the close of the 1960s, Walt Disney Productions had experienced some significant achievements: The Wonderful World of Color garnered excellent ratings on NBC, Mary Poppins became their biggest hit of all-time in 1964, their involvement in the 1964-65 New York World's Fair was lauded for technical entertainment innovations and Disneyland was going strong, adding some of the most memorable attractions in the park's history. Walt Disney was fortunate enough to witness all of this before he passed away in December of 1966. Before he left this world, Walt left behind the infrastructure to begin a new enterprise on the east coast, which became the Walt Disney World Resort in central Florida: formally named so and brought to fruition by his older brother, Roy O. Disney (the business half of Walt Disney Productions.) 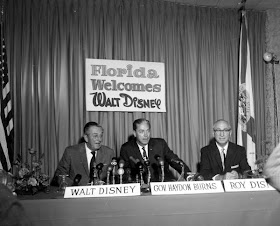 
The scale and construction of the east coast resort was a bigger affair than the original shareholders of Disneyland, Inc. could fund, but by the time the first phase was open in October of 1971, Western Publishing did their part in providing the usual selection of Golden Books, sticker/coloring books, puzzles and activity kits that promoted the brand-new Walt Disney World Resort. 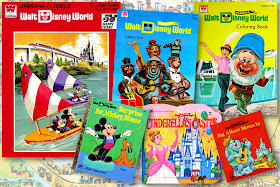 Western Publishing Prepared New Promotional Merchandise for the Launch of
Walt Disney World in 1971, Just as They Had for Disneyland in 1955
Cover Art © Disney

This time around, there was no giant comic book to commemorate the opening of the enormous theme park and hotel complex. But if you've made it this far, you can probably guess there was a logical comic book showcase for Western to promote Walt Disney World that autumn... 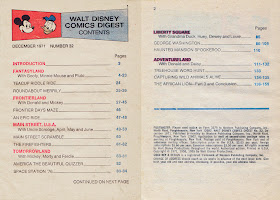 The layout and attraction line-up of Walt Disney World's Magic Kingdom were similar to Disneyland's, with the differences existing between facades and icons (e.g. Florida's towering Cinderella's Castle and Liberty Square area) and a handful of new attractions such as The Country Bear Jamboree. Western picked up on both aspects and again "Frankensteined" a portion of the special issue using several earlier Dell Disneyland stories for the identically themed areas such as Fantasyland, Aventureland and Tomorrowland. The framing device also took it's cue from the Disneyland-themed Dell Giants, with a framework of introductory panels showing Walt Disney characters arriving to visit the new park. 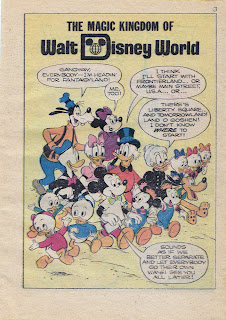 This time around, however, Western took the initiative to create some new content focusing on the unique architecture in the splash pages framing the stories centering on the new icons of the Resort: 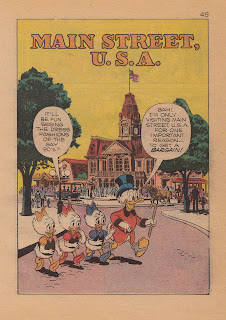 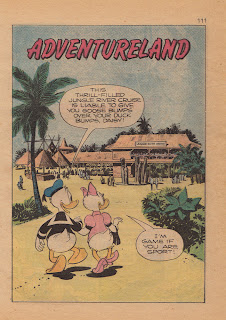 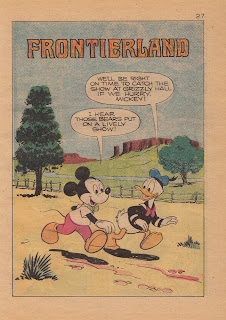 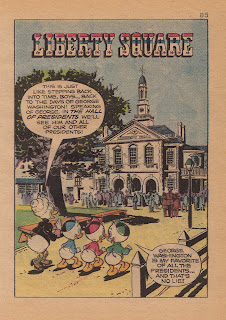 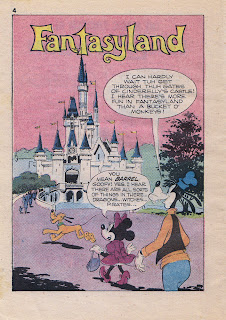 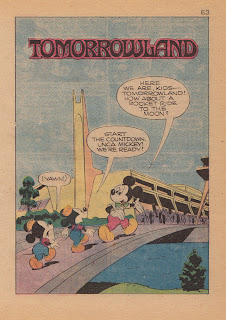 
It should be noted that the character art and the landscapes on these introduction splash panels are by the hands of at least two separate artists. Tony Strobl provided most of the pencil drawings (and possibly inks) for the character art, but the the surrounding settings were likely drafted by a Western/Gold Key artist adept to adventure or live-action based comics, perhaps Dan Spiegle or Alberto Giolitti. There were also several new and reprinted full-page games and puzzles, including this word game featuring Br'er Rabbit and the Florida-specific Haunted Mansion: 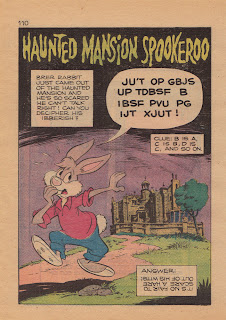 
The framing panels aside, there were also two ORIGINAL stories for two of the themed lands in the new Magic Kingdom. A brand new, 11-page Main Street U.S.A. tale by Pete Alvarado in which Scrooge McDuck expresses a desire to travel back to the actual turn of the century (where prices are more acceptable)—his wish is helped along by a gadget from Ludwig Von Drake.

The other new tale is a 19-page Frontierland story, also by Pete Alvarado. Mickey Mouse and Donald Duck head to Grizzly Hall to view a performance of the new Country Bear Jamboree: Henry, Big Al, Trixie and the cast of the new audio-animatronic show make their first (and ONLY) comic book appearance. 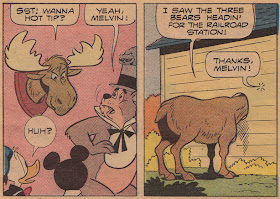 The Frontierland/Country Bears Story Explodes the
Myth of Melvin the Mounted Moose!

Mouse and Duck assist in an Old West-style chase with some nods to Mike Fink and Davy Crockett. The Bears are well-depicted in character, as guests know them from the original show. But you can see for yourself: the text below is a link to a downloadable PDF of the entire Country Bears/Frontierland story. I don't believe this story has been reprinted anywhere since 1971! The file is about 12MB, so make sure you have a steady connection.


There's actually more to come on this subject beyond the 1970s... stay tuned! In the meantime, this series has a slight detour in the timeline between Parts 1 and 2. Click the link below to read Part 1.5, to gain some more insight on the initial impact of theme parks in the mid-20th Century, early days at Disneyland, and how it all looked through the lens of The Duck Man himself:


* The last two Disneyland comic books to hit the stands were Dell Four Color #1025: Walt Disney's Vacation in Disneyland (August/October 1959) and Dell Giant #30: Walt Disney's Disneyland U.S.A. (April/June 1960), both of which featured stories and cover art that prominently highlighted the first significant additions to Disneyland at the time of their debut: the Disneyland/Alweg Monorail, the Matterhorn Bobsleds and the Submarine Voyage Through Liquid Space. Had Walt Disney Productions repurchased the shares from Western a few years later, it is very likely comic readers of the 1960s would have enjoyed comic book tales of the Enchanted Tiki Room, Pirates of the Caribbean, and Adventure Through Inner Space written and drawn by some of the great comic artists of the time.
Dan at 12:46 AM
Share