Here begins a new illustration series of square "vignette" illustrations based on the early Hanna-Barbera TV cartoon characters (roughly 1957–1964). First, a little history on the subject...

During the golden age of theatrical animation, William Hanna and Joseph Barbera were teamed up at MGM's animation department, where they created the studio's biggest cartoon stars: Tom & Jerry. From 1940 to 1957, the animated cat & mouse team won over audiences worldwide, and reaped a remarkable SEVEN Academy Awards for Best Animated Short Subject. 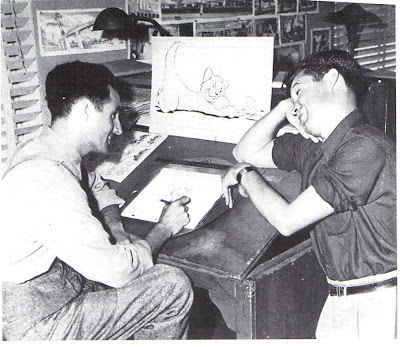 By the late 1950s (like most large studios at the time) the short film divisions were deemed less than profitable, leading to the closure of MGM's in-house animation department. This left a resourceful Bill and Joe with the opportunity to plow forth into the infant medium of television animation. Beginning with producing animated TV commercials under their new company name Hanna-Barbera, they sold a package of serialized shorts starring their first original-for-television stars Ruff and Reddy. Many of their creative colleagues from MGM joined the staff, bringing H-B's product a familiar, yet all-new style for a viewing public hungry for content. 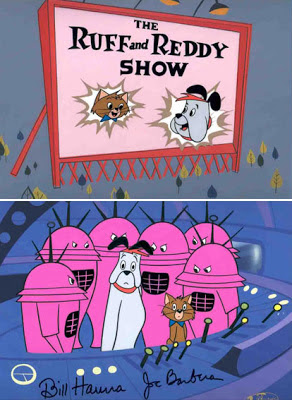 While re-runs of older theatrical short films proved successful for syndicated television "package" programming, the new crop of animated stars from Hanna-Barbera often broke the fourth wall commenting on the fact they were on television, used modern-day lingo, and referenced other TV shows giving the viewer a sense of ownership. 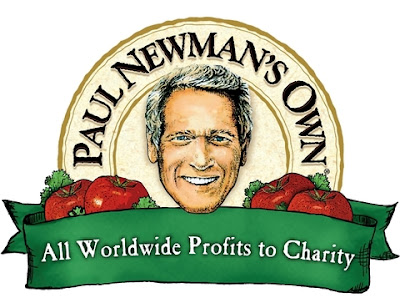 So what's a vignette in terms of art and design? A vignette is commonly used in design and philately (the study of stamps/postal history) as an unusual or unique image framing method. You can also see this method utilized many places besides stamps, such as product packaging, advertising and even greeting cards.

Which brings us to this new series of illustrations, paying tribute to those early H-B productions: 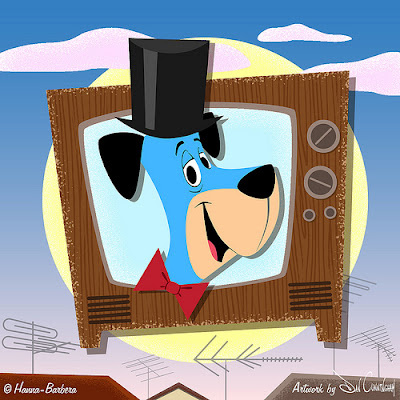 Huck's laid-back Carolina accent came courtesy of Hanna-Barbera mainstay and voice-over legend Daws Butler. A common misconception is Huckleberry Hound's personality and easy drawl was based on that of Andy Griffith: actually, Daws had used the same voice for Bill and Joe at the MGM animation department for a non-threatening wolf character in shorts like Billy Boy and Three Little Pups. Butler based Huck's voice on a neighbor of his wife's family. 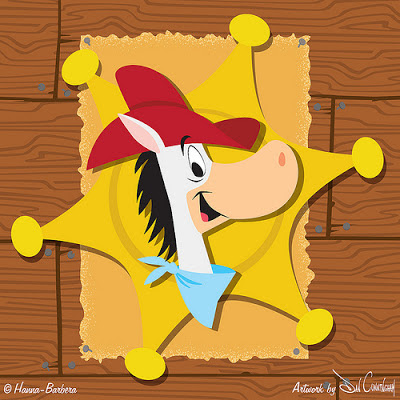 
Quick Draw's slow, gangly cowboy drawl was also provided by Daws Butler. Quick Draw McGraw is one of the few Hanna-Barbera characters that was not directly based on a celebrity or real-life personality. 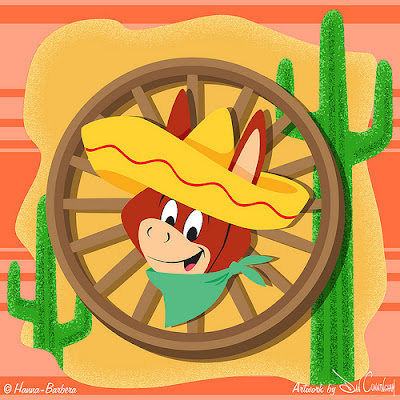 Diminutive burro Baba Looey was Quick Draw's loyal sidekick, with a name derived from the popular signature song "Babalu" by Desi Arnaz of I Love Lucy fame. Baba Looey's hero worship forever helped get his life-long pal "Queekstraw" out of jams when battling cattle-rustlers, bank robbers or saving damsels in distress. He may be best-known, however, as the impetus for the nickname of Howard Stern's long-suffering radio producer Gary "Baba Booey" Dell'Abate. Baba Looey's high-pitched Latino accent was also provided by Daws Butler.

There will be more to come in this series, and perhaps we'll dig further into H-B stories as we go along. If you're anything like me, and enjoy animation and Hanna-Barbera history, there's a blogger with two sites with some outstanding posts. So seeped in Hanna-Barbera knowledge are they, that BOTH blogs are named after H-B canines (of which there are many*)...

YOWP centers on the theme of what this series of illustrations: fascinating minutiae on the earliest Hanna-Barbera TV cartoons. Detailed notes on the music, creative talent, promotional materials, shows and individual shorts the likes of remain unmatched anywhere else.

TRALFAZ expands the introspection to many different animation studios, both TV and theatrical. If you are interested in the creative personalities and techniques involved in the production of animated productions, this blog is required reading. There's even a bit of cross-pollination with old time radio and Hollywood personalities—after all, many stars lent their voices to animation, or allowed themselves to be caricatured both visually and vocally.

Be sure to go check 'em out, and check back here in the coming weeks for more "smarter than the a-a-aver-age fun."**


* Joe Barbera was notorious for sticking dog characters into the cartoon casts, especially after he learned a particular TV executive was keen on any show featuring dogs. For the record, Yowp is the small white hound featured in 3 different H-B shorts, as a hunting/tracking dog, known for his low, repeating bark of "yowp-yowp-yowp"—perhaps even more obscure, Tralfaz was the original name of the Jetsons family dog bestowed upon him by his wealthy first owner in the 1962 episode Millionaire Astro. Both dogs were voiced by Don Messick, who provided vocals for nearly every Hanna-Barbera dog, including their most famous pooch: Scooby-Doo.

** If you hang around me long enough, it's pretty likely I'll toss out a quick line as a character voiced by Daws Butler, then act like it never happened.