See You in Disneyland #3: Wally Boag as Pecos Bill As promised in the 8/10/12 post, we're celebrating the wild antics of Wally Boag: "that loud, long, lean, loquacious, lunatic who likes to deal, delve and dabble in delirious dialogue and dynamic dissertations." Wally's hilarious long-running performance at the Golden Horseshoe Revue is the focus of the third illustration in my See You in Disneyland series.


The art of human caricature can go through infinite filters, I took some careful consideration on how to depict Wally here, since he was a live performer and the first two entries in See You in Disneyland were sculpted, character-based figures. Because this is part of series, there has to be consistency across the individual illustrations in order for them to be viewed as a whole. To maintain a rigid, human likeness would stray from the style established, while going too far into stylized caricature would cause cartoon-like icons (like the Sea Serpent and Reindeer) to appear more realistic. What's been chosen is a reasonable balance allowing everyone to exist within the same world. 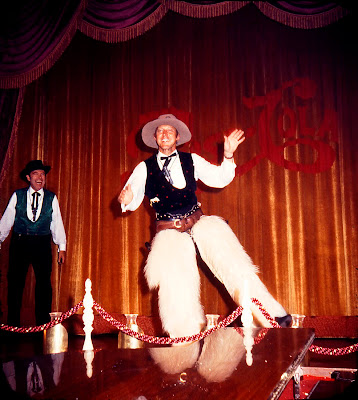 From Disneyland's opening day in 1955 to 1982, Wally performed several shows daily in the Golden Horseshoe Revue in dual roles for each performance: first appearing as the "Traveling Salesman" where his iconic balloon animals, patter and dancing were featured, followed by a quick change backstage to return as a zany "Pecos Bill" for the Revue's song and dance finale. The "Pecos Bill" routine was a frenetic, upbeat number in which Wally squirted the audience with water pistols, casually doffed his toupee, then spit out uncountable "teeth" (baby lima beans) after getting socked in the jaw by Slue Foot Sue, portrayed by the beautiful Betty Taylor. 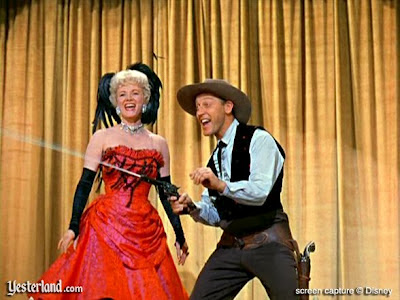 The original Golden Horseshoe Revue show ran from 1955 – 1986: a remarkable 31 years presented by a seasoned group of regular performers. During this span, the original show ran over 50,000 times and is listed in the Guinness Book of Records as the longest-running musical of all time! Despite banking thousands of performances, the cast made each show seem fresh, fun and spontaneous as though it were their first.

Wally Boag's comic persona and one-of-a-kind balloon animal act immediately became a favorite of Walt Disney himself—Walt never failed to bring important guests and dignitaries to get a box seat and watch Wally gambol across the boards of the Horseshoe. In fact, Wally Boag inspired many several young Disneyland employees to take up comedy as a career—including a young man named Steve Martin, who regularly cites Wally as the main inspiration for his stage and stand-up persona. 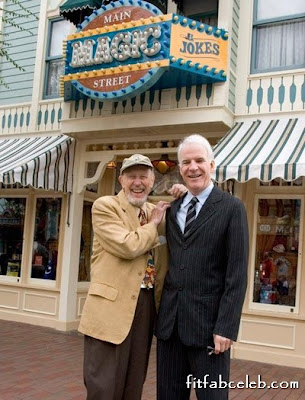 Wally Boag and Steve Martin at Disneyland in 2005
Image courtesy of www.fitfabceleb.com

You'll see more here on the Golden Horseshoe down the line, we'll return to pay tribute to our lovely leading lady and ebullient Irish Tenor. The Golden Horseshoe Revue remains a favorite to many and will always be an important part of Disneyland history. In the meantime, here are some great resource to discover more about the show and its legacy: 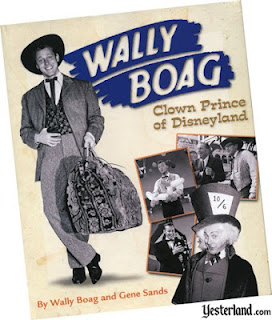 There's more See You in Disneyland to come, too... next in the series, we'll travel deep into the wilds of Adventureland!
Posted by Dan at 5:25 PM