The first in an ongoing series of original illustrations celebrating the many inhabitants of Walt Disney's original theme park: Disneyland, USA.

The first friend featured is the goony Sea Serpent brave travelers discovered at the conclusion of the original Submarine Voyage in Tomorrowland. Guest-filled submarines slowly drifted by a menacing long tail and snaking torso, only to reveal his comical, wavering head with spinning eyeballs. Here's a rare picture of the actual Disneyland Sea Serpent through the submarine porthole: 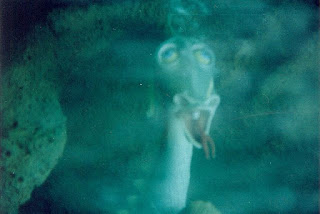 The Sea Serpent appeared as a surprise towards the end of the Submarine Voyage, his appearance prompting your Sub Captain to decide to submerge. The current incarnation of the Subs: "Finding Nemo Submarine Voyage" includes a tribute to our friend the Sea Serpent, in the narration and within the rock work outside your porthole view, so keep your eyes open next time you visit Disneyland!